The conditions of 2020 made our Spirit Communication demonstrations impossible for months, our events were cancelled and cancelled worldwide. For more distant countries the restrictions still apply!

We are all the more pleased about the first possible séances in Hanau and a short time later under strict conditions in Switzerland.
For the mediumistic organism in the field of physical mediumship demands, after years of regular demonstrations, the outflow of subtle energies, as it happens during the séances. If one pauses too long, mood swings, physical imbalance and depressive moods become apparent.
But perhaps the pent-up energies were partly responsible for the fact that the experimental results were particularly impressive, especially in Switzerland, and revealed particularly impressive photographic material: for the first time, the so-called spirit portals could be photographed in different stages of their interactivity! For the first time a double portal could be photographed.

The joy-guides of earlier séances from the region of the nature spirits, which had not been manifested for a long time, appeared again and after one of their lightning-fast flights through the room, one of them stuck his small child-like head through the portal and was photographed!

The portal-photographs are basically very impressive, in the gif we see an open portal morphing and in the single photographs we see active portals at the moment of transmission!

The partly strict conditions under which we demonstrated led on the other hand to exciting new possibilities in the observation of the phenomena, for example at the Basel Psi-Verein. Since each participant and the medium wore a luminous sticker, it was possible to look through the whole room even in the dark. This is a clear plus in proving the inactivity of the medium during the highly active phases in the séance room.

In the French-speaking part of Switzerland, we were able to observe and photograph complex portal activity and the manifestation of objects, as well as some old and particularly beautiful objects brought along for recharging. All fotos were taken there by Markus Kappeler, Switzerland entrepeneur and highly involved activist and host for extensive private experimentation sessions.

In the two regular Basel demonstration séances with a large number of new 'sitters', the levitating objects and the musical instruments played in the middle of the room were particularly impressive for the participants present. In the backlight of the stickers glowing opposite, one could see exactly how targets were played or levitated without the presence of human help! 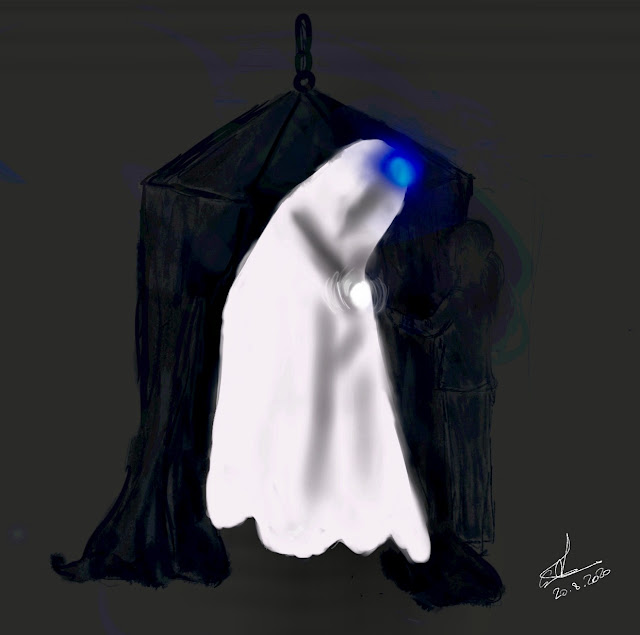 The highlight was, as always, the 'Advanced Séance' with a group of participants who had already attended at least 3 regular demonstrations in the last 2 years. Then you are allowed to attend experiments on Spirit full materialization!

And this time it happened again in a very powerful way. Spirit Control 'Hans Bender' explained the reasons for the appearance of a very powerful special guest and delivered a message (see below). And then the 2.10m tall figure of El Morya Khan appeared from the cabinet self-illuminating the whole time from his shining crystal on his forehead plus massive flashes discharging from his heart-area, the Chohan (ruler) of the 'First Ray (Blue) of Divine Will and Power', he is a direct 'promoter of human evolution' and is connected to many spiritual and magical organisations - like ours.

His energy is understood to be straight, clear, disciplined and royal. He is considered a sublime and trustworthy authority in his system of 'Ascended Masters'.

Who is El Morya Khan?

'Your society is currently suffering from profound disagreements!

While these were already serious before the current crisis, now degrees of disorientation and disintegration are emerging that require my intervention.

The spirits of the Western Hemisphere, which by their very nature have hardly noticeably shaped and shielded your societies, have been levered and deliberately weakened by our opponents. A not insignificant battle within this war for the spirits and hearts of humans and many other species out there is taking place right now, in the vast space of this cosmological conflict!

It is striking you humans in the core of your being because it is also your own darkness that is staring at you, pulling you out of your midst and putting all the cycles of disaster into action.

For this reason dive into my light of activation, into my light of healing. My apparition activates control at times when things seem to be taken out of your hands. It shows the urgency of reaching out to those who have let themselves be taken over by the darkness and who are pushing forward the divisions within societies rather than healing together. My apparition and my light lead you into readiness. Follow the light in thought, speech and action and spiritual allies of great influence will accumulate again. In the protection of my light the great whole can be recognised and fear can leave the hearts! My light shines inside and outside! There it takes place, the adventure called life, as beautiful as it is dangerous. Your present lives are a short passage, they pass you by, will be finished tomorrow! Are you ready!?

'And then El Morya Khan stepped out of the cabinet: A slim tall man, wrapped in a thin but solid 'cloth', in a whole shaped like a bell, no noticeable wrinkling. Transparent in the area of the chest and head, a slender arm clearly visible underneath, the hand towards the chin. The left arm I have only seen in outline.

Flashes of light in quick succession illuminated the whole figure. But the most impressive was the large blue light in the area of the forehead and the crown. Like an evenly shining crystal, great blue! (...)

In the light of the flashes of light the body behind the transparent cover of ectoplasm became visible again and again. (...)

The thing that touched me most was when he bowed to us in a semicircle (...), facing everyone, without jerky movements, but gliding.'

We are thankful for the spiritual allignment and integration of all sitters that night!

May the light shine on!

Posted by KALIA Mind Expansion at 05:52

thank you Kai, that was truly an amazing read.i would love to come to one of you seances.

Oh Kai and Julia...cannot wait to be apart of one of your seances one day. Thank you for all you do and for all Spirit. This was truly and amazing read!