For six years I am privileged to observe from close range what occurs around a today 48 years old German medium. I observe it in every public séance, I observe it when we are alone, in hotel rooms, cable- or motor-cars or simply at home. I saw objects materialize in daylight. Appearing in front of me and then falling from mid air to the floor. Or 550 gram-artifacts appearing from massive light bursts in front of Kais chest. I saw the Ouija board writing extremely profound messages with only Kais hand on the planchette and his head resting, turned away from the board, sleeping. Under his both hands layed upon, a 70 kilo table made from glass and metal made huge jumps through my living room. I saw the trumpet fly in red light and photographed it. It was me recognizing eventually that this man couldn't regulate his mediumistic outputs, had no ability to influence his mediumship, was helpless against his natural destiny, chased by his own energies and spirits, and was in the following developing what we all had wished so strongly for:
Full Materializations.
By the way, I am married to this man.

Now the voices say: as long as these are no fully controlled sittings, they are worthless and have no value! Really? I would like to intensively disagree. For two years Fully Materialised Phantoms appear in a variety of conditions and circumstances in front of altogether maybe 100 people, who describe the experience as mystifying, deep and profound and who have made most exquisite observations. They all would have been disabled to witness or experience anything, they would not have been there, if that had been any scientific setting. They would have all been excluded for the benefit of a few scientific jurors, whose biases would be verdict eventually.
No, thank you!

When the first self-illuminated spirit girl stood in front of us, the present sitters weren't really prepared at all for that. It took days to sort out our all observations. Were her eyes brighter shining than the figure itself or laying deeply black within the shiny apparition? Such questions! But then it started to happen more frequently. And we learned that until today there are different ways existent for these entities to appear!

THE WAYS AND FORMS SPIRITS MATERIALIZE IN OUR SÉANCES

SELF ILLUMINATED APPARITIONS
Her eyes were a malmstrom that had a hypnotic attraction and effect on me. Sitter of April 2015
The most earliest occurrence we can call Full Materialization happened for a small group of Private Guests and additional Felix Circle Sitters in 2015. Actually in séances before like mainly in Switzerland at the Basle PSI Association we had very slim shiny apparitions before. They were also  exiting the cabinet in darkness and approached sitters. But these were more like columns of light. They were moving through the room but had no facial features for example.
In April 2015 guests had made contact with their deceased daughter 'Emely' in Hanau and over the weekend she again and again responded via knocks and responsive tiny spirit lights flying around.
The shiny material we saw and the entity building from it is well depicted in the following video

I have never seen something stranger than this. It was a total darkened séance room, and it looked as if a texture around the fully animated entity would be glowing. This texture was her skin, hairs, but also her dress. Her eyes were the brightest part. They were extremely shiny and had an hypnotical effect on all present.

RED LIGHT MATERIALIZATIONS
At first I thought it was an earthquake. Lucius Werthmueller, President Basle PSI Association.
Several times spirit materializations in Basle, Switzerland, at the BPV, were stepping in red light in front of the cabinet. Everytime a strange rumble-like tremble or vibrations were running over the floor and walls. At least once they were so drastic that sitters started to feel nauseated by it, or felt sick in the stomach, because the vibration ran also through their bodies. At that instance it was actually considered that an earthquake was hitting Basle, before the spirit control claimed, they would 'condense matter' within the 'atmosphere' and that it was them who were causing this unearthly shaking.

In the following I talk about the most recent materialization and quote sitters who had written to us afterwards. As it was announced by the spirits their Materializations would uncloak from time to time, resp. with the time. Moreover this time the spirit team announced that they - like with the faces embedded in ectoplasmic mass - would 'let through' deceased relatives of present sitters for materialization in the séance room. With some quotes from that evening I try to give the personal experience of the sitters a form of expression:
'Suddenly this strange rumbling started, letting floor and the walls behind me tremble, before the woman in white stood in the cabinet entrance.'

'The whole room was shaking!'
'Not so drastic, like the first time, I experienced it, but I felt, it was the same deep trembling rumbling through the walls and floor!'
'Everybody was clearly sensing the shakings and some stopped their singing and asked what was going on!'
'But then suddenly the red lights went on, and there she was!'
'I will never forget the 22nd of June 2017, decades I was longing for one last visible encounter with my deceased mother, and then this white apparition with black hairs looked directly at me, and in my heart i had that overwhelming indescribable feeling. For years I was longing for that! I still have trembling knees! I am so thankful for the materialisation and want to thank all involved parties!' 'The evening was so ingenious, a big thank you to the spirit team!'
'It was overwhelming!' 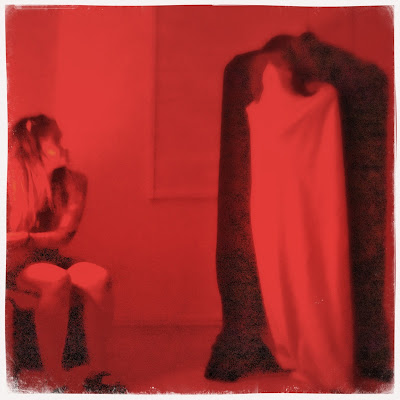 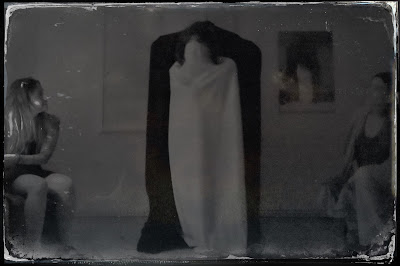 The materialized spirit was clearly identified thus. This was a major step forward in that regard. Actually there were three persons who said it was a relative, but only one felt that massive overwhelming heart-connection.


THE SPIRIT SPEAKS
Up to now the entities only said a very few things. Single words like 'Light'. But at another red light séance a few days ago for the first time a Materialization in front of all spoke clearly and meaningful. It told a present circle its name. Their own communicator had announced in Hanau, Germany, they would receive their name and so it was. Standing in the cabinet entrance it spoke to the circle-members and when the red light phase was over it even asked for more light to add something. The voice was peculiar and we had never heard it before from none of Kais communicators.
MEDIUM AND SPIRIT SEEN AT THE SAME TIME
The Medium was several times seen with the materialized spirit at the same time, like during a red light séance at the BPV, Basle, in March 2017. It was announced by the spirit team that the upbuilding of the spirit form would be shown in its specific stages. In one of the open curtain sections one could see the entity stand behind the medium, embracing it from behind. One could see its white garment, its hairs, its arms enwrapping mediums chest from behind. More over we experimented with Kai in front of the cabinet to show the difference between Kais size and the size of the most entities. My husband is a huge guy and it is unthinkable that he is impersonating the entities.
Kai was seen additionally together with other materializations like when 'Khan' materialized or 'Emely'. 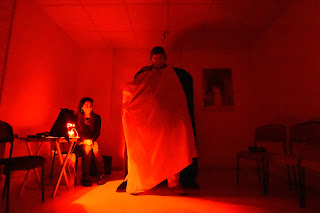 Actually the entities are obviously smaller than Kai, besides the fact that both were seen together anyway during séance and I mostly hear him breathe in the back of the cabinet. The entities have asked for bigger cabinets, claiming that there isn't convenient space for spirit-materialization in the hung up cabinets we are using.

SPIRIT ENTITIES BRING THEIR OWN LIGHTS
Everytime the blue light bursts from the figures chest area it stands somewhere else in the room. Sitter of Hanau séance 2016
'The 'blue' around the head was very shiny and in its midst I could see a glistening white light! Again and again amazingly beautiful blue lights flashed in the air. Sitter of Thun-Séance, July 2016

Several times the entities were travelling the space of the séance room in a teleportation like manner. It flashes on the left side and for a break of a second a blue halo reveals a white clothed entity standing in front of the sitters sitting on the left. It flashes again and the entity stands in a totally different location like at the end of the circle. In that manner it moves around until all have seen it and then it is simply gone...!!!
A Basle Sitter once has drawn the moment. Of course it doesn' t show the 'teleportation' but only the entity bathed in blue light.

Another truly spectacular incident was the Materialization of an alleged indian prince from the 18th century, called 'Khan' by Hans, the spirit control. The Materialization was extremely huge, nearly 7 feet and had a blue shiny crystal at its forehead. Yes, I know, but that's what happened. Additionally it didn't stand, but somehow floated a good foot over the ground and illuminated massively the fully darkened séance room. The lights that were occurring during this séance were truely impressing and it is well described here and in this video:

So as you see these are exciting times and do you know what? This is all happening for us, for our enlightenment, for our understanding, to recover the magical within our world and of course eventually to help to survive. Herein lays the spirits core message.

I hope you found it interesting what I had to share! I am what that concerns in a special position to witness it all and that is the reason why I try from time to time to let you look through my eyes.
I say thank you for your interest...

Posted by KALIA Mind Expansion at 13:53 No comments:


NEWEST (and older) ARTICLES - THE ARCHIVE