(Author Ute Sautter, born 1959, is one of these rare truely gifted mediums and professional practitioners in the field of the etheric. Already trained as a professional dowser 1994, the information- and computer scientist became a professional healing practitioner with several trainings starting 2000. She published together with Dr. H.Wiesendanger, a renowned holistic scientist and healer in the german-speaking environment. From early years on she always received extra-sensoric information and became also a scholar at the Arthur Findlay College to complete her skills with additional trainings in Germany.
She is today herself a well-known professional healer, working medium and animal communicator in a successful own practice in the south of Germany. She is a gifted trance-speaker and active in Physical Mediumship for several years. She has early involvement in the Felix Circles work and visits circle, members and medium K.M. for years. Frequently she invites and holds private séances with the Felix Circles Medium in her own rooms in M.)

Saturday exclusively K.M.'s experienced sitters here in M., were present, who all had sat multiple times before in his séances.
That evening I myself served as the medium-controller, holding and securing him on his chair during darkness phenomena. On the mediums other side his wife supports my control duties holding him as well.

BRIGHT LIGHTS AND SPIRIT CHILDREN
Already at the beginning bright lights were discharging, from inside the cabinet and in front of it.
After the medium had sunken in his deep trance completely, 'Hans', the trance- or 'spirit'-control was friendly greeting the sitters.
Witnessing the most early phenomena, 'Hans' again claimed spirit children were present, who activated the distant musical instruments in the focus-area on the other side of the circle.
Something uncommon was happening when i secured the medium on its chair this time, suddenly he wanted his wife Julia to let him go and meanwhile in the focus area 7 feet distant from the medium was high spirit-activity, the medium completely turned towards me and I held and secured both arms and legs between mine. His wife instead overgave her hands and feet to her neighbour.

I SECURED BOTH ARMS AND LEGS BETWEEN MINE
The holding control measures basicly, and specifically their variations, already exercised the night before also, are showing repeatedly and unmisunderstandably Kais full independency from the phenomena.
The rest of the nights control schemes though were the regular ones - medium held from both sides.

'Hans' early announced an extraordinary object to be materialized for Julia, mediums wife. She had birthday next day and it was called to be an appreciation of thankfulness and empathy by the spirit team!
The medium sat at that point in time in front of the cabinet and in low red light it shook repeatedly its hands (he wore a t-shirt, bare arms).

HUGE STONE FELL FROM STRETCHED OUT HANDS
It was obviously a very exhausting process. Again and again it stretched out its hands and suddenly with a flash of light and a well audible rumble a huge stone fell from them onto the floor.
Examining it, it turned out to be a wonderful, mossgreen Center-Stone.
WOW!
The color is totally extraordinary and as a birthday present from the spirits, who appreciate all her hard work for them, what a true blessing. 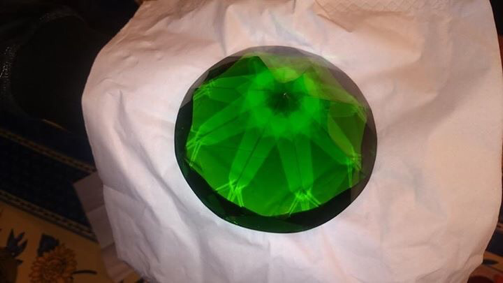 Picture: Julias massive and heavy center stone for her untiring work for the spirit realms

Hans kept on talking about - another - apport to happen, claiming it to be very old and rare! A heavy glass-like artifact, allegedly manufactured in the 13th century by a group of very wise adepts in a Laboratory in Bamberg, a Bajuvarian town. Eleven pieces of them the spirit communicator claimed were originally be created, but only seven of them were still active today

MANUFACTURED IN A 13TH CENTURY LABORATORY
A stone that cannot be simply substituted - when broken - by another. A sensitive sacred object: the'Blood-Stone' (an Activation Stone also, but a specific rare edition).
By no means it is called bloodstone because of its ruby-red color, but because 'it is connecting the souls like blood would do with organs'!
The stone has the power truely 'to influence Karma', channels 'powerful energies' and has the ability 'to enhance spirutal healing powers when hung under the ceiling' above the treatment zone I was told.

A LIGHT FROM THE CEILING MAKES A HEAVY RUBY-RED GLASS-ARTIFACT APPEAR
With a light coming from under the rooms ceiling a huge ruby-red stone appeared on the floor. Julia overgave it to me!

In connection with this, Hans layed out how 'they' overcome distances when apporting within the three-dimensional time-space. He used a landmap with two distant locations marked on it to explain. The fastest way to get from one spot to another is to fold the map, put both marked locations directly above one another and pinch a needle through. 'We are folding time space', he said! How interesting!! 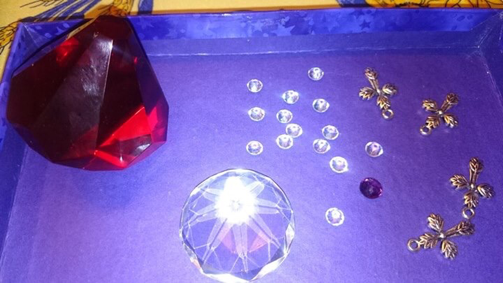 Picture: The ruby red 'Bloodstone' and the objects from the mediums eyes plus another clear 'Activation Stone' found beneath the curtains cloth afterwards.

During Hans' talk objects pattered onto the floor and a lot of objects came from mouth and eyes of the medium. They were a lot of small cut multicolored stones and metallic crosses also

A SLENDER FEMALE HAND LIKE PORCELAIN
After that curtains were closed. The medium had retreated into the cabinet. 'Hans' remarked, after it did not work to create distant handforms last time, they would start another try closer to the medium.
After a few seconds the medium exited the cabinet and fired outbursts of light again and again onto itself, coming from its hands. This enabled us to identify a slender hand sitting on the mediums head having a porcelain like look with  a classical sleeve like cloth around its wrist coming from out of the dark behind him...!  Not everybody could see that quite well but i could. The hand moved down from his upper hand to his forehead. Accompanied by these strange blueish outbursts of light coming from the mediums hand until everybody had eventually identified what they were looking at...!
Absolutely astonishing!
The hand was looking strangely well formed and smooth, not like the oftentimes malformed hands we encountered usually.
The curtains closed and 'Hans' announced spirit visitors to come. One of them allegedly coming purposefully for me!? 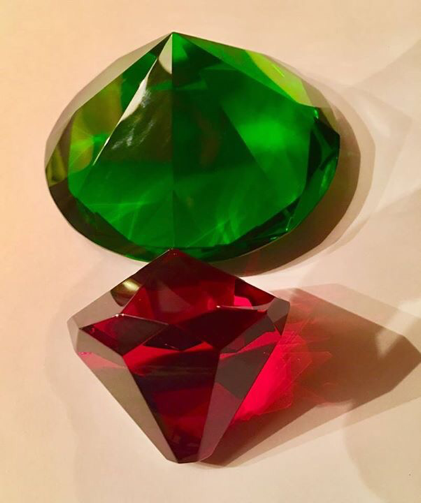 Picture: The both main objects together...!

He said that ectoplasm was to be extruded and the curtains opened again: On the mediums chest was a white mass visible and the medium drew and pulled its fibrous appearance permanently. Doing so the images of 3 humans started to appear!

THE IMAGES OF THREE HUMANS STARTED TO APPEAR
Very delighted I became aware of my spirit guide 'Red Cloud' above the other two human heads, ready to show up for me that particular evening!
There was another woman and another man visible too, who came for somebody else in the room.
Very likely the male one was a female sitters father and about the woman i haven't heard about from visitors present that evening...!

After this extremely impressing finale the séance came to an end. Everybody was fascinated and deeply impressed!
We want to express our gratitude to the medium K. and his wife J. and to all the spirits behind them having made that evening possible!

UTE S.
Posted by KALIA Mind Expansion at 09:01 No comments: