A CLOSER LOOK - A Composite! Not a Photo!

A closer look at the Composite from the 'Mitzi Mange Materialization' Photo Nr.2
PLEASE BE AWARE THAT THIS IS NOT A PHOTO. IT IS THE RESULT OF MIRRORING AN IMAGE AND DUE TO THE NATURE OF A FACE MANY THINGS MIRRORED CAN TAKE A FACE-LIKE LOOK. So in the end it is nothing more than an interesting result in so far that actually such a complete face evolved from the editing.
Author and Investigator William Treurniet says: 'Also, if the formation of the etheric form had gone to completion, the features may well have changed shape or become something else. So the result you show says very little about the appearance of the intended face.'
If the visible face actually shows what was covered by hair is actually quite questionable, nevertheless the result was worthwhile to present, we think.
Undisputable in fact is the Materialization that was the source of the photograph (shown on image 4 below). This is the true sensational result of this story! 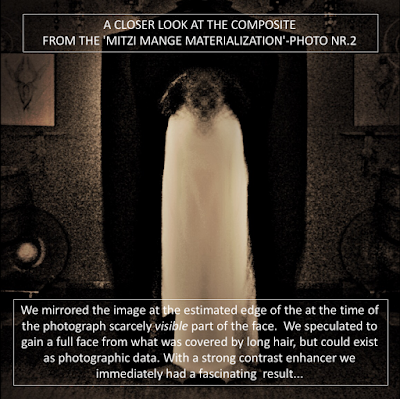 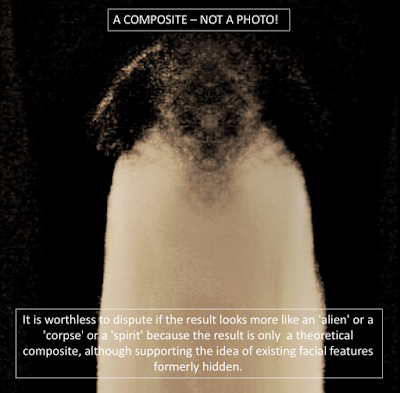 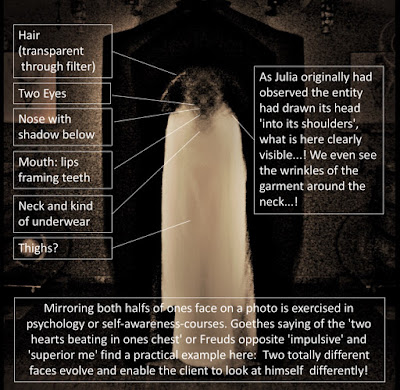 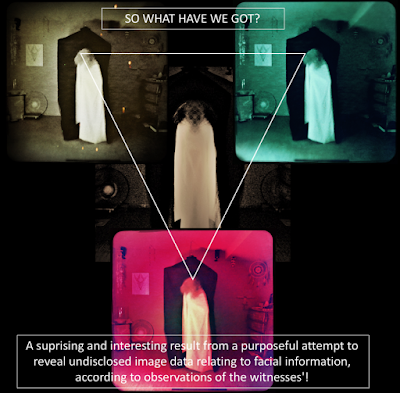 BREAKTHROUGH - and the FLOW CIRCLE

Momentarily, believe it or not, something extraordinary is going on.
We (Felix Circle) were once 'chased' from our cellar into public so to speak - by our spirit controls (the impulse to go public with the results achieved with the Mediumship in the Felix Circle came from the spirit world originally) - claiming that with the bravely against all criticism presented phenomena developing entanglements with existing and newly inspired circles would sooner or later trigger strong systemic results, all active parts would prosper from.
The circles we would build connections with would interlink with us into a together created active meme, building up with every new result systemically shared.

It is the creation of a new morphogenetic for Physical Forms of Mediumship, not anymore solely dependent on historical results from previous centuries. One way to interlink is for example the still upcoming website about the worldwide materialization of sacred objects and artifacts - like the activation stones - representing physically the hubs of that living system.

All who are globally identified as spiritual centers and individuals by the materialization of the sacred objects through the spirit entities can present on the website their objects and a huge worldmap will then actually depict the global systemic connections!

The spirits also always foretold breakthroughs to happen! When enough information has been gathered from its interlinked hubs the morphogenetic field would transcend they said - and a transformation of what is possible will happen!
Let me tell you that several circles we are befriended with for years at the moment go through a process of transcension in regards of the range, degree, quality and strength in their physical phenomena making us believe a breakthrough is happening right now! At the same time also the trance communication, usually having to overcome high obstacles, produces yet unreached quality and strength regarding momentary communications.

There is the Clear Primordial Light Circle with their increasing results, the Experimental Group Thun with their 'Emelie' entity who develops unique forms of holistical healing processes from the spiritual plane, there is the Nuertingen trance-physical Circle around medium and healer Frauke, the physical Sundeer-Circle around Author and healer Rolf W. Stadelmann, the physical Cas Ina-Circle, the physical Raffaela-Circles, the new Furrer Circle and others in the German speaking environment, unmentioning our connected physical circles in US, like Neals and August Goforths circle we just reported about, those in Australia, Denmark and Norway, that have partially operated massive results at the moment!

And there is the German FLOW-Circle not to forget - that unfortunately won't ever be able to go public because of the business relations of Josy, mediumistical counterpart to her husband Albert, physical deeptrance medium. Their circle leader Michael has just sent me another astounding minute protocol and report we will share soon.

Albert is counting for me to the most promising upcoming physical mediums of the year and you will learn about its strength and magic again soon!
Posted by KALIA Mind Expansion at 11:02 No comments: