When Zophia Weaver 2016 published her small booklet about the astounding Polish Physical Medium Franek Kluski, those of us knowing the historical German and French publishings about him - and the english translations of them - were eager to read what Zophia, as a woman of the same nationality, might have in charge for us. We knew she had access to the original polish publications about Franek, and it was expected she would come up with something new from her approach.

Because like with for example Indridi Indridason, the international mostly english or german speaking researchers always were massively slowed down in their explorative attempts by the existing language barrier! And Polish was and is as a language as inaccessible as it was and is icelandic.

And meanwhile E.Haraldsson in his 2015 publishing 'THE ICELANDIC PHYSICAL MEDIUM' revealed surprising new information about Indridi only icelandic speaking researchers had over decades access to, Weaver actually did not so.
Considering that the mainly in German and French published contents about Kluski were not too exhaustive, and were mainly referring to Geleys 1927 publication 'Clairvoyance and Materialisation' and reporting about Kluski based on experiments with him in Warsaw and Paris, many had somehow expected more from the Weaver book.
It's a thorough personal analysis, but nothing new!

Meanwhile in regards to Indridi we learned with the todays publication some important facts that were - obviously purposefully - controlled and withheld for nearly a century by those who spoke the language and had access to the historical minutebooks, in regards to Weavers todays Kluski-publication she not even took the chance to publish some photos only rarely seen from the 1926 rare polish original publication by Colonel Okolowicz, 'Wspomnienia Z Seansòw Z Medjum Frankiem Kluskim'.

Kluski, who was a bank-institute employée and poet, an intellectual, was well known for a lot of amazing mediumistical phenomena - from his luminous fogs and phantom-faces, over to materialized predators like lions and falcons (photographed) or the 'picanthropus', a 'Neanderthal'-like hairy ape-like entity that smelled like a wet dog and 'licked the hands and faces of the present lady sitters', who squealed in mystified amazement, to Full Materializations in different stages. Moreover wax-moulds of hands and feet were achieved meanwhile the medium sat stationary on its seat within the circle.
Kluski was controlled through sitters sitting left and right from him and holding his hands.
In high frequence phantoms did materialize and illuminated themselves with flourescent plates or were self-illuminated and shone in the dark.
They appeared either opposite from him outside of the circle or behind him outside of the circle. Very rarely they appeared inside of the circle.
Most of the phenomena did occur regularly and so did the phantoms and Geleys photos showed them seemingly in different building stages.
Three times the seemingly fully materialized spirit forms were managed to be photographed: A strange oriental figure with turban, dressed in white and wearing a beard (the plate was damaged and the figure is hardly visible), the Picanthropus, who appeared quite differently on the photographic plate as it was perceived and described - and a regular visitor, a german soldier in classical WW I-uniform with helmet. 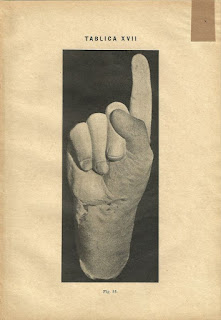 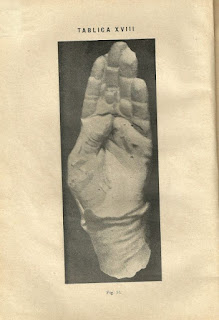 Other spirit visitors appeared as well, some of them also regularly like an old toothless woman. Sometimes the materializations had first a strong resemblance with the mediums face and developed more own characteristics over the sometimes up to three stages a séance evening was built of. The phenomena began mostly immediately when a low red lights lamp was switching off by itself or unknown means and mostly with luminous fogs around the medium that later seperated and started to form these more dense figures. Flickering lights, mostly in the same color like the flourescent plates or plaques, turned out to be living eyes when they approached the sitters.
We very much recommend Geleys book mentioned above or his 1922 edition 'Materialization experiments with Franek Kluski' to learn more about his intriguing mediumship!

The German soldiers photo however was in the following of its taking many times mentioned but rarely - or better 'never' - actually reprinted unlike many others from Geleys 1927 french and german edition, that very regularly showed up.

The photograph of the German WWI soldier is a spectacular piece of séance room photography and it is thus even more unexplainable why it was never shown in reports about the Kluski mediumship in periodicals of the time!

Like we did before in the field of séanceroom-photography we today make the photo accessible to a wider english-speaking audience and hope it achieves to satisfy the reader to look at and study it as it did satisfy us.
Additionally we publish here the other images from Okolowicz 1926 edition (full pages-scans from and scanned by the polish Nautilus website), as we do publish all the images from an original 1927 Geley antiquarian edition of 'Hellsehen und Teleplastik' ('Clairvoyance and Materialisation'/edited high-res scans).
In the following we present the images from the German edition 'Hellsehen und Teleplastik' from the antiquarian library of K.M..We even repeat to show those that were depicted above because of a slightly better image quality! 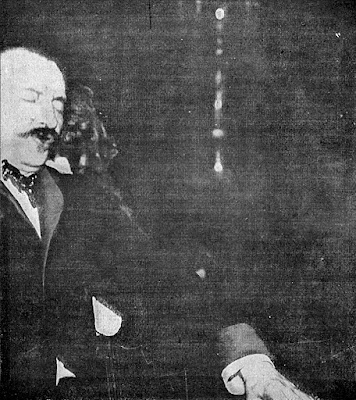 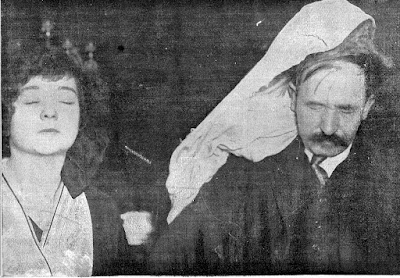 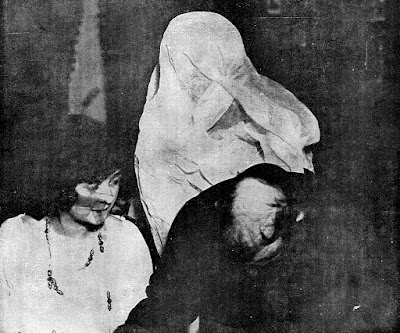 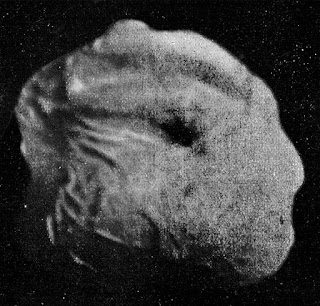 We hope you enjoyed our excursion into historical European Mainlands Physical Mediumship with this outstanding example of a physical, resp. Materialization Medium of its time!

Posted by KALIA Mind Expansion at 21:19


One of the best selling Trekking in Nepal,
and Local Trekking Company in Nepal and
Reliable Trekking Agency in Nepal.


One of the best Tour in nepal as
Kathmandu Valley tour,
Kathmandu Nagarkot tour
and chitwan Jungle Safari in Nepal.


A One Nepal Trek is on of the Best Trekking Company in Nepal
Trekking Agency in Nepal and
Trekking in Nepal.