(Rolf Stadelmann is a well known Switzerland Shaman-Healer and Spiritual Teacher in his early fifties estimatedly, from Basle, a Magus and an Author about sensitive healing work with plants and plant-essences, shamanistic, mediumistic and sensitive healing work.
His main website 'sun-deer' can be found here)

The first séance, 28th of November 2016, that was attended by many first timers, was of a powerful program of mediumistic basics. Well audible knocking sounds from walls and ceiling, touches by spirit hands, spirit-entities walking through the room (medium sitting in the circle strictly held, mostly moderating ongoings like that from its position), movements and playing of musical instruments and fingers and a full hand on a plaque in a distance from the controlled medium, and a flying trumpet.

Specifically impressing was a rain of stones literally from mouth, nose, ears and eyes of the medium, as well as the materialization of a small deity figurine made of brazen into the hand of a lady sitter in red light, followed by ectoplasm in red light. 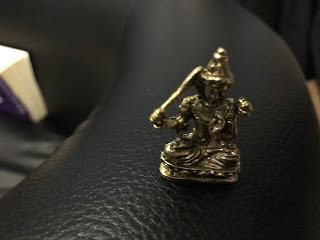 After exiting mediums mouth it was detouched with the help of his hands and was developing a pulsating life of its own down on the floor - and like from an egg breaking open, a not fully formed, but well recognizable hand reached out and erected itself upwards.

was completely different - when we had many interesting, supporting and valid informations already in the earliest moments of spirit communication and basicly over the course of the séance itself been given.
Beginning there were clear stones, raining onto the floor (see photo), the moment the main spirit control was 'stepping-through' (the medium), and following - over the course of the séance - there were frequent small forms of light visibly exploding or flashs of light discharging - and later brazen deity figurines happened to be materialized directly into the hands of four sitters....

Specifically extraordinary was the 'recharging' of estimatedly five huge 'Activation Stones', the so called 'Centerstones', placed at the beginning of the evening together into a glass bowl.
Somewhen during the sitting, medium sat inside the cabinet (usually only when there is light used in the circle, for example to arrange something) and asked for the stones, which were handed over to him immediately.
Then we saw the bowl filling up with ectoplasm exiting the mediums mouth and well observable started to shine blueish. Meanwhile the bowl was held in one hand, the other hand made again and again circular movements above it.
Symbolically spoken it was like a magus, who with sorcerous movement patterns 'bespoke' and 'reloaded' the 'Centerstones' and that took quite a time....
Towards the end of the sitting a kind of rudimentary 'life form' of ethereal nature showed up, with a mellow white-yellowish self-illumination and moved in quite a distance from the medium and cabinet into the room.
Moreover this time two trumpets were simultaneously brought into flight and all personal Activation Stones (much smaller than the Centerstones) sitters had brought into the room collectively became reloaded newly also, holding them outstretched, when a very bright flash of light exploded high above the cabinet located slightly outside the sitters circle.

Again the séances were both touching, tantalizing, meaningful and instructional, and impressive! Rolf Stadelmann
Posted by KALIA Mind Expansion at 22:22 No comments: