Video documents the Apport of objects, materializing from mediums eyes in huge quantities (as from other facial orifices...).

Apportation phenomenon has been part of the Felix Circle experience from the beginning on.
From peculiar water apports while singing 'we all live in a yellow submarine', to rose-petals, waxballs with messages of the deceased, objects of religious character - buddhistic and hinduistic figurines appeared in the hundreds - and all forms of gemstones and semi-gemstones imaginable, we became used to.
With the time apportation/materialization in red light was becoming makeable and standing altogether around the table under red-light conditions holding hands, suddenly, in front of us all, objects fell onto the table, seemingly coming from nowhere. Then shortly after in front of all present, from the checked (by vision and touch) bare outstretched hand of the entranced medium objects materialized and fell into the hands of guest sitters as gifts.


Very much appreciated were always the wax ball apports containing handwritings of the deceased, which are very rare today. Those we had received over the years had quite an impact though. Have a look how they looked like, showing the example of the Albert Hofmann wax-ball. Even though this was one of the shorter messages, its impact, phenomenologically and emotionally onto the receiver, an old friend of Mr. Hofmann, was massive and its origin unquestionable, after children and colleagues had confirmed the handwriting of being his. The following images are stills from a powerpoint presentation. Receiver was the award winning author and famous event organizer (Basle PSI days, Basle PSI Association), Parapsychologist Lucius Werthmueller. 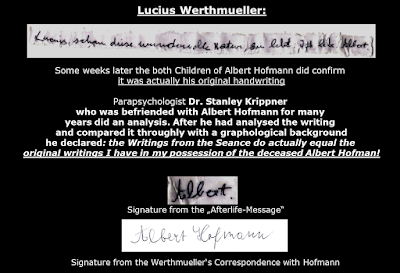 Meanwhile during the development sittings with the circle the objects carried on to enter the circle in many different ways, the deep trance processes with the 'Alchemisten', the spirit team, progressed as well. Specifically the bare hand apports brought more and more amazing results and people started to describe, sitting directly beneath the mediums outstretched hand, what they saw, when objects developed from it (the following is a composition made by a Australian sitter 2013):
Engineer William Treurniet shows in a video what he discovered within a strange stone, that was materialized for him: the peculiar three-dimensional image of a woman:

Another form of deep trance apportation was the sudden materialization/apportation from a light appearing in the hands of the entranced medium. One of the first of these apports has happened in the USA, when from mediums checked bare hands with a light a very humid flower appeared, full of waterdrops and a living ant at/in it:
From then on even the massive activation stones for 'centers', huge spiritual stones, were coming from the light inbetween the mediums hands into the séance room in red light!

Then for the first time in Florida the spirits used the meaningful and fascinating venue via the eyes. It was a huge crystal exiting the eye-socket:

Video: For the first time Apportation via the eye under the overwhelming positive conditions Rev. Kevin Lee of the Metaphysical Church in S.F. was providing

A few days before we were experiencing with Kevin Lee another extraordinary apportation event at the beaches of F.L.. Meanwhile having a walk in the early evening in the fine sand and under the palms at the shore, Medium Kai had the strong impulse something was digged in the sand and did let Rev. Lee search at 5-7 coincidentally chosen locations in the sand. Then there it was, hidden approx. 3/4 of a foot deep in the sand, a symbol made out of bone or alike of religious character.

During a week in a scientific séance-room 'laboratory', in the third year of investigation by an american scientist the apports enhanced their evidentiality a lot. For example a focus object was brought into the séance room for an apportation experiment, that looked like gold foil. Entering the séance room the previously searched Medium K.M. was told it was made out of copper.
Within minutes something fell onto the white experimentation table in bright red light: a piece of pure copper!
More and more usual it became that the spirit controls wanted from the strange séance room atmosphere something to give the people with. As a reminder in regards to their teachings about the consciousness and the Multiverse and the necessary awareness and responsibility coming with it for us humans.
So during séances there were oftentimes many different apportation events bringing forward objects appreciating the engagement of the ones, who were specifically committed and even the others who were simply present.
Flying into the circle from nowhere in the dark or red light, coming visibly from bare hands, laying suddenly in the midst of the floor even though it was just being cleansed by Julia Muegge for example, or exiting Mediums body by means of a flash or without in red light well seen - or suddenly building up within ectoplasmic substance.
Taking the route through the mediums face so to speak started when for the first time the spiritcontrols announced a drop-in communicator 'step through the portal', being himself a famous US-Medium in the seventees. It was in Florida for the first time he appeared and produced an object coming from the mediums eye-socket slipping forward from under the mediums eye ball:

That not only started to become a spectacular and frequent demonstration in deep trance séances, objects also appeared spontaneously, seemingly triggered by outer events like for example in the environment of an Uri Geller demonstration. Unfortunately it didn t happen in his direct presence but it seemed to be connected obviously.
Moreover it wasn t necessarily related to the deep trance pocesses anymore and happened after an automatic slight entrancement.

This is the apportation event happening only with a sudden slight trance in the environment of the Uri Geller event in Basle, Switzerland:

When the 'Dr.Felix Spirit Team' does its healing routines, like here on Ibiza, 2015, when Julia was able to actually catch the moment quite well showing the massive object appear behind the eye-lid, stones and objects also materialize or apport on a regular base.
In the following instance medium was only slightly entranced:

Meanwhile the following event was happening in deep trance actually, you can estimate hearing the coarse voice of the trance control speaking. At another séance on Ibiza, the Trance Control asked Julia to locate a swelling above the jawbone on Mediums right side of his face. Julia searched and found the hardened area within Kais lower cheek. She was asked to push it upwards towards the eye and mysteriously the former swelling above Kais jawbone protruded the tissue in a way that is also not at all physiologically logical and exited the eye eventually.
Have a look, eye-socket apportation in deep trance:


We hope you have enjoyed the new video material at the beginning and our excoursion into the past of the FC and its séance room wonders, we are still approaching in humbleness knowing we are all blessed to have that exchange with the ethereal.
Be aware you are all part of this and everybody can take active part in sittings and séances if you really wish!

Posted by KALIA Mind Expansion at 12:32 No comments: