JULIA MUEGGE: ANOTHER VISIBLE FULL PHANTOM MATERIALIZATION ON BEHALF OF MY HUSBANDS MEDIUMSHIP - during three séances at the famous BASLE PSI ASSOCIATION August/September 2016 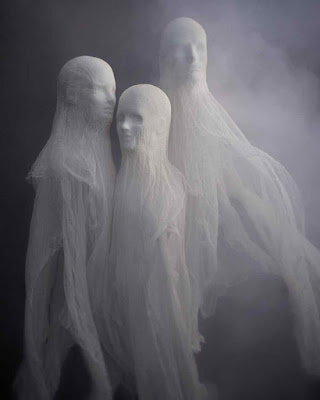 I would like to tell you about my husbands seances in Basle this week.
About their specific highlights and of course about the dramatic and amazing visible full form materialization in the third continuative séance for 'advanced' sitters.

The first one was full of first-timers. They were privileged to see many of the basic phenomena the guide 'Rudi' (Rudi Schneider, famous physical medium) is mainly responsible for.
Meanwhile we held my husband Kai strictly, in a far distance (at least 6 foot, 210 cm) music instruments played, sitters were touched and above the 'plaque' handforms of spirits were moved, quite quickly that night, and not as persistent as usual.

Suddenly I heard somebody walking the free area inbetween the sitters circle. Audible steps over the last years were quite varied: we heard naked feet, high heels, thick boots and all kind of shoes imaginable. This time it actually sounded as if shoes with open shoelaces were walking around. And then spirit control started to describe the spirit visitor: a young man who died in his 30ies, a jeans-type of guy, with black hair, wearing jeans and sportshoes with open shoelaces, what was typical for him. The steps stopped in front of a female sitter.
'It is my cousin, he touched me at the stomach!'
Later R.Z. related to Sabin Suetterlin, that her cousin was actually known for the shoelace-thing and that the rest of the message was a match as well!

After the darkness-visitor episode a glow-in-the-dark handkerchief was well visibly grabbed by spirit hands. They also were somehow presenting their handforms purposefully within the hankies glow ...!

But these are admittedly phenomena produced for years in different grades of outcome, like the free-floating trumpet that flew wildly and detached from any physical form or body and impressed us a lot!

And although there were so many first-timers advanced and later developed phenomena were also shared: after the well known 'bare-hand-apportation' in red light the eye-apportation process was executed - and increased dramatically over the week - or the visible energizing of formerly materialized stones that were seemingly exploding in light, when the spirits held my husband Kais hands above it.

A famous switzerland medium, Bea Rubli, known from TV and for her highly intuitive and sensitive work, had again brought another group of spiritual scholars that filled the new climatized séance room at the BPV and provided optimal psycho-emotional energy for the evenings different specialties: A lot of strange lights i could observe that night! During the breathing routine i already saw huge pale lights ascend in the dark in front of the cabinet. Later i saw a blueish light, that was like a solid light and left the cabinet in a rectangular form in the upper section, hard to describe.

Award winning Author, Antiquarian and Investigator L. Werthmueller stated: 'We had the most strangest and unique light phenomena that night: It was a blueish light from the cabinet that was mystifying. It produced strange stripe-like prolongings of light in the air and at the ceiling. I have never before seen that in all the countless séances held here at the center!'
Lucius also described: 'Later a huge self-illuminating mass appeared suddenly and stretched widely upwards. Then it made turns and stretched out into the room like a flag with its side parallel to the floor. An amazing sight!'
I also was very close to the substance shortly before, when the spirit control had put the brightly shining mass over my head and stretched it out as if blocking the entrance of the cabinet. I can always feel the stickyness of the material that is sometimes appearing dry and sometimes humid. That night it was ice-cold and literally wet.
Kai went around with it, controlled by his spirit and did let several sitters come in touch with it.

Directly after another bare hand-apport for a specific sitter - a beautiful golden figurine for a young male - and a short introduction the spirits produced without any pause or darkness interruption objects many from the face and we watched them crawling from nose, ears, mouth or bulging under the eyelids before jumping out. Six gemstones we counted that night, eight objects the next, only from the eyes!!!
For Sabin Suetterlin, the independent BPV-medium holder (FEG control protocol says all darkness phenomena have to happen with medium being held by at least one independent control-person) and long term translator for the AF-College, 'John Sloans' head and face appeared within the ectoplasm in red light, thanking her for her selfless work at the college. With a gift for Sabin the evening ended. Right from the mass Kai just had shown the face from or walked around with, he kneaded another activation stone from.
Under a good red light (40 W) all could see - and me specifically - how Kais hands were quite strongly manipulating a coincidentally chosen section of it and slowly the white mass became dark. The darker section suddenly took a reflective characteristic and we could see first small pieces of the Activation Stone, until it was fully excavated. Even then the stone still sticked at the mass and hung there until Kai detached it and overhanded it.

THIRD SÉANCE - VISIBLE FULL MATERIALIZATION EXITS THE CABINET / APPEARS WITHIN FLASHES OF LIGHT AT DIFFERENT LOCATIONS WITHIN THE SÉANCE ROOM ...

This night began with kinda high pitched expectations because the spirits had talked about preparations for the crude ectoplasm, its denser form, enwrapping basicly what we call 'full spirit forms', something everybody is waiting for. Kai always freaks out previously to continuative sittings because he thinks the spirits cannot always still the hunger for extraordinary phenomena like the 'Full Materialization', and he overtakes the pressure. I always calm him down reminding him, the spirit controls never have disappointed ever before! I feel his nervosity though ending in extra-long breathing routines, until he is finally gone.

'Hans', the control, was in good mood when overtaking and talking about the message, the awareness, the responsibility and about building the planetary network-connection to 'make the divine within men an even brighter and more mercyful act of creation...!'

From a massive white flash of light a huge center stone materialised and was overgiven to famous Scottish Medium Bill C. for his centers between Europe and U.S.! Then a red activation stone was materialised and overgiven to another long-term sitter Yolanda S..
'Hans' then spoke to the sitters in red light about the fact that their joy to be with us always would take physical form and waved the sitters to come close. Again a massive rain of objects started - with alone 8 gemstones that exited my husbands eyes - from all facial orifices. It crawled and fell from nose and ears and mouth and added up to what is shown in the photograph (see photo!)

Shortly after i had shown the collected retrievals around, the room started to rumble - and immediately the sitters started to cheer! It became stronger and stronger and was of course the preceding episode to the powerful Materialization of Aleister Crowley in the same room in red light a few months ago!
At the entrance of the cabinet a red-light dimmer was fastened for the spirit to show itself longer this time having the red light under its own control. This was expressed via the spirit control earlier!

'Hans' explained, when the Materialization, another spirit of the network, occurs, the lively functions of Kai would be extremely low because life-force was transferred to the spirit form! Then his voice became weaker and weaker and the tremblings became stronger again. People joined and sang...! We all were ready and Luci with the camera was ready to shoot the spirit in the red light!

It began with blue flashes illuminating a slim white figure slightly taller than the cabinet standing in front of it. It stood there and was again fully enwrapped in white materials. In frequencies between 2 and 4 seconds blue flashes from its breast exploded into the room illuminating it strongly!

Suddenly the weak voice of Hans back in the chair announced the figure was Kais grandfather working with him in healing usually.
And immediately after, the figure stood suddenly inmidst of the room revealed by another explosion of blue light. Sitters R.S. and O.G. described: 'The phantom was smaller, when it stood inmidst of the room!' 'And then it seemingly was holding its hands apart and the white garment-like clothing was held apart!'

Then in quick succession flashes occurred and the materialisation everytime stood at another place in the room. That was so strange - it seemed as if the figure was transferred by the light from location to location through the room. It was literally otherworldly!
Then it seemed to come back to the cabinet and then it was very close to myself and when the blue light came 'out' of the phantom i felt something extremely hot! I cannot say what that was, but the blue light was actually surprisingly hot...! Claudia Z. stated: 'When the phantom 'jumped' through the room it appeared extremely close to me and i was overwhelmed by its energetical presence. I never experienced that before!' So close back at the cabinet we awaited now the red light dimmer to be used... - but suddenly i heard from the back of the cabinet how Kai was starting to cough unusually strong.

What was going on?! The red light was disfunctional!
The figure couldn't use it, and we heard Kai saying: 'I am out!'
Out of trance! Everybody was a bit consternated but the disfunctional red light had probably led to a 'fast exit', so to speak and the séance had to come to an end and the sitters left the room disciplined.

Apart from the light-accident the night was again extraordinary!
All the Materializations of the last months, they all had strong and unique characteristics and Kai and me look forward towards an era of Third Millenium Full Materializations that seem to come out spectacular! Kai says 'the spirits stand ready at the portals' and i believe that after all I have seen!
The spirits are our life and we live with them every single day and night!
Come and join us and let's trip together towards amazing times with the spirit world!

Julia.
Posted by KALIA Mind Expansion at 21:46 No comments: