As Felix Circles Chairman and main medium it is a pleasure to relate to you this exclusive story!
The involved parties withhold their identities with the comment 'it is about the message and not about the messenger!'

It is a Wednesday night, and two long year participants of the 'fellowship of the stones', for years mentored by higher 'Felix Circle'-guides and sitting enduringly for development, have gathered under séance conditions in a darkened room. Suddenly it happens - as it already has before: inmidst of a conversation something heavy drops onto the floor...

The energy is still high but they decide to switch the light on and to identify an apported object: A beautiful huge 'Activation Stone' lies on the floor, a spiritual sacred object, representing the spirits entanglement with the planetary humans and man's path of unfoldment. And again it is a 12-plane cut, as it was before - like a personal identification mark from that specific medium.
A complex message is connected to these stones about responsibility, awareness and the awakening of the divine within us!
APPORTS FROM BEHIND EYE-LIDS

But there is not much time to appreciate this gift, this statement, at that moment because both feel a sort of palpable energy still in the room active. Suddenly one of the mediums, a male in his fifties, who already had produced right from his body a 12-side cut one before, reaches to his face. Something between startled and alarmed he holds a hand to his right eye and claims something was in it: 'I can not help you, if you don't let me see!', says the other, recognizing her opposite sliding back into his trance.
Now somehow much more patient he presses a peculiar object from his right lower eyelid. A huge white object falls from it. It is a remarkable piece of Magnesit!
'Now watch', he says and within a second his left upper lid bulges and produces a smoky quartz!

Then still entranced this message is given: 'Plane is open - portal is open - Connection is established...!' The energy drops and both realize excitedly what just had happened.

'THE GRID IS ALIVE' or 'CRYSTAL DAY' in Lugnorre, Switzerland

So it was depicted at the sitting during the 'Crystal Day' in Lugnorre 10 days before, in a 'Direct Writing'-Event:
'The Grid', was written there, 'is alive'!

It is alive within as it is actually existing represented by the stones and active parties outside of US and seemingly the spirits have chosen another messenger, at least up to this point! That is amazing and additional confirmation about the justification of the spirit philosophy coming with it! 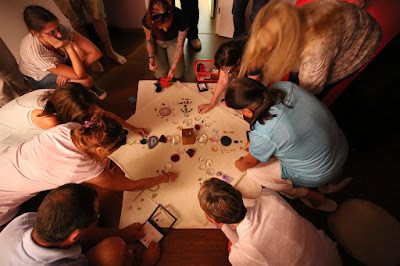 The video and photos show a result of switzerlands entrepeneur Markus Kappelers held 'Crystal Day'-event in Lugnorre, Switzerland. As chairman of the 'Clear Primordial Light-Circle', he and his wife Anita had invited 12 personally close scholars of practical mysticism to Lugnorre, Switzerland, to start a framework for regular 'Crystal day'-events in the future.

This first one had the topic 'Sacred Stones and Objects' and a thorough lecture was being held about. From the oldest sources of folk wisdom and belief, from the collection of Bechthold-Stäubli, i was citing and sharing the most peculiar information available about what the german speaking environment had to tell about sacred stones in all sizes and eras, about mantics with them and about other superstitious activity around stones.

Then instructions from the spirit world how to use sacred stones and crystals for healing were presented and discussed. Before the 'Activation Stone'-Mandala then was created eventually, all brought sacred stones became energetically uploaded by the spirits with an explosion of white light around them...!

In the evening - the combined and remarkable table séance was held, when inbetween a papersheet-block, hidden in the closed cabinet seperated from the circle, the 'network/grid'-related words appeared!