THE ENTITY or EXCITING HIGH STRANGENESS EVENT AT PRIVATE SÉANCE IN M., SOUTH-GERMANY

Many do believe or claim, that physical séances are a loose chain of physical phenomena with no deeper meaning or reason at all. In fact the contrary is the case with the Felix Circles main communicator(s). They share a message according to a historical plan starting with the beginning of the spiritualistic age in the western hemisphere.

The spirit messages of the Felix Circles Spirit Communications were characteristical in regards of telling about a new age of understanding of a kind of 'central message' within Spirit Communications over the ages, missed or misinterpreted from the beginning of the movement on and its urgent momentary 'coming to surface' for a benefit of all.

It is about the universal purpose and meaning of planetary embodied human life and its redemption. It is about its true universal potentials and its natural intertwining with the 'dimensional whole' and its necessary role in the universal play, we and the spirits are both part of!
We have already deepened that on other occasions.

Usually the main communication and messages are delivered by a main communicator during deep trance sessions, from time to time claiming to shift over to other personal energy matrixes/spirits, dependant on their faculties (in producing physical phenomena, in presenting verbal content of different character like practical or philosophical, for example).

This time, on Saturday, the 19th of September, during a séance at a private retreat in M., South-Germany, a change in communicational energy again took place but unawaitedly in a visible way. First a mysterious greenish light started to get more and more intense inside of the cabinet and when opened a strange ectoplasmic mask-like self-illuminated mass covered the mediums head and shoulder area. It had the look of a rough head-like something, that became immediately clearer, when its face suddenly opened its bright glowing eyes that shone strongly throughout it was talking to the sitters.

Connected the head was with something like a glowing spine, from which the head was slowly moving in a circular pattern while looking forward into the round of the sitters circle.

This figure-like mask made an intensive impression onto the sitters, who on the recording reacted excited and amazed.

Who was the entity? We believe it was a kind of higher organized gate-keeper communicator who showed itself maybe for the first time in its otherworldly shape!?

In the following we present drawings of the event, created by the host of the weekend, when in total two séances were being held. Moreover we present photographies of object-materializations that happened to happen as well over these days. For your joy and consideration! K. 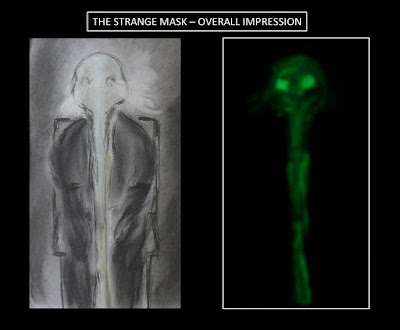 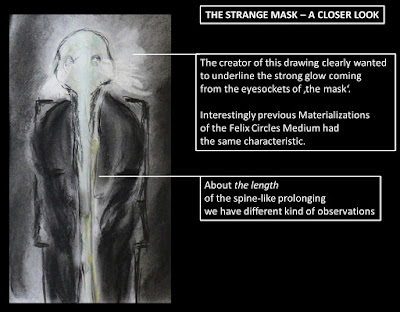 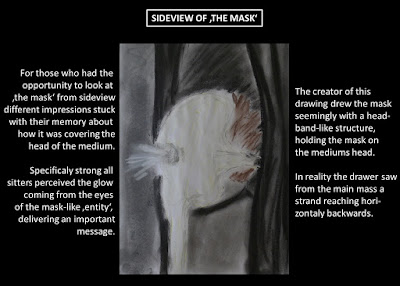 Posted by KALIA Mind Expansion at 21:50 No comments: