For 20 years former Scole Sitter and Researcher Dr. Hans Schaer is holding his Ibiza Week with Materialization- and Physical Mediums from around the world. In the fifth year the Felix Circle is visiting resp. its medium Kai, me, this time again with my wife, Julia, the circle leader.

It all began with the Scole Group and their mediums and Stewart Alexander who were the first protagonists of the Ibiza weeks.
2015 there was the Bill Meadows Physical Circle, Warren Caylor, us, Dr. Hans Schaer and the Basle PSI Association plus friends present and it was a week really to remember. It had a special kind of harmony, the former years were already moving towards to but not having reached this years level of friendship and trust inbetween the present parties enabling the fulfilling settings the group was sitting in.

Sitters did sit up to six hours daily in Physical Circles. Many spontaneous events were held, when for example, meanwhile working at the PC in the classical 'Scole-Room', the 120 kg heavy black 10 feet to 4 feet oak-table started to jump under the laptops of the mediums. Quickly several sitters where at hand and a spontaneous sitting was created, many times in good light conditions. The massively heavy and huge table started to lift completely even with no hands at all laid upon. It simply floated like a boat in a heavy sea with all legs levitated meanwhile all did hold their hands above it!

Different constellation of sitter groups used the séance room more or less over the whole day.
Other highlights were the scheduled mixed 'Séances for Table Levitation and Associated Phenomena' held there with different mediums - and the scheduled full feature cabinet seances of them of course as well.
CABINET SÉANCES
Over the 10 days we experimented with different cabinets. Finally for the Felix Circle Control Entities it was chosen that the in the photo displayed setting would be the most fulfilling in contrary to the former room-corner solution. The small bathroom entrance thus became the curtain area of the cabinet and the bathroom itself the cabinets sitting space.
In the case of Kais séance directly left and right at the bathrooms entrance two chairs were placed for two medium-controllers, holding the medium during his trance.
In Warren Caylors case a gagging was provided helping to demonstrate the autonomy of his Direct Voices speaking around the area of his head and from time to time even from locations independent from his physical body like from the ceiling or in table séances from under the table.

Ectoplasm was becoming visible in different aggregate states. In Warren Caylors Cabinet Séance from the 27th under a slightly glowing white plastic table (a turned around strong shining plaque was making the table glow in a pale light) several times the sitters could clearly see a foggy white substance appear and move strangely, as if something wanted to build under the table. It was alleged that one of the child-controls that sometimes work from under the table in Warrens séances was wanting to materialize and to a certain degree it had succeeded. Unfortunately we were not allowed to photograph it.
The Spirit Controls of Kai were allowing to photograph after the first visible extrusion from his mouth the 25th of May. Slowly and with no help of hands the substance left the body. At the same time it came out of the dark of the cabinet climbing along the cabinet curtains into the red light.
The extrusion from his mouth turned into a hand and showed its lively features and a ring that it was wearing.

After stretching the susbstance coming from the dark of the cabinet on its left and right side (see photos) by walking into the room the medium drew substance from the curtain on the left side and attached it to his wifes head and neck area, meanwhile at the same time it clinged to the curtains with strange like malformed broader pseudopodias. On the right hand side the substances look and its 'hanging' down the curtain reminded of ectoplasm produced and displayed in Schrencks sessions with Eva ('Phenomena of Materialization', Munich 1925)(see last photo). 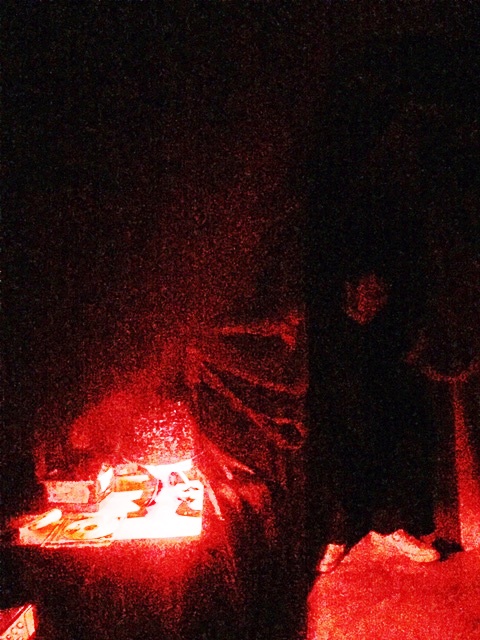 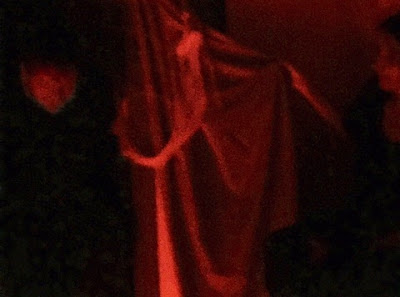 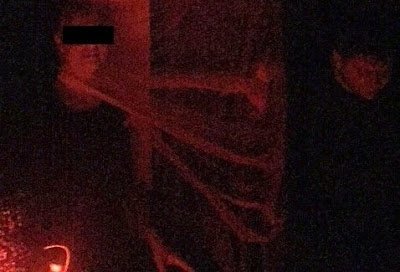 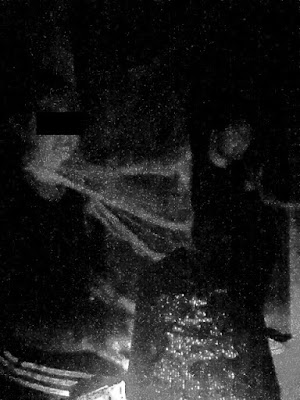 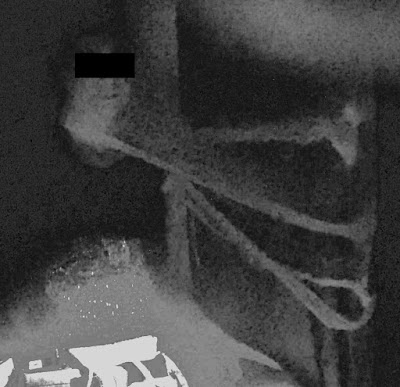 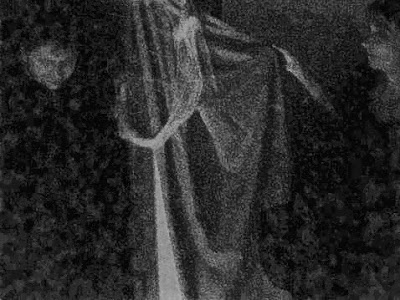 Photographed ectoplasm at the Week for Advanced Physical Mediumship on Ibiza 2015. Well visible are the attaching pseudopodias coming from the dark of the cabinet on its right side. Later the medium walked into the room stretching it and it became clear it was attached to his back as well. Parts that adhered to the curtains were then adhered to Julia as long as the spirit personality through Kai was explaining its stretched out and well visible features...

With the medium Kai in full holding control at hands and feet by two control persons the Felix Circle entities levitated a cardboard 'trumpet' in wild patterns around the séance room, interacting with sitters and showed clearly its independency from the medium.

A very impressing expression of Warren Caylors Mediumship this year were the dialogues between the different control entities. Their voice mannerisms are so different in pitch, resonance and emotion (Tommy childish mischivious high pitched, Yellow Feather old wise humorous compassionate coarse, Luther primitive in approach rough authoritative with the voice resonance of a cows voice box, Jessica extremely sensitive quiet female) that it is fascinating to listen to them in a discussion situation.
In one instance three of them discussed heated about to wake up Warren from the trance inmidst of the séance or not. Two spirits wanted to, one said to let him sleep. The spontaneity and by natural dynamics determined interplay of extremely those different voices demonstrated their indepedency from each other and from the medium.
Would that not be fascinating enough the entities frequently want to have red light to show the usually bound Medium is still gagged and carry on to speak then in the dark again.
The climax of that impressive somnambule Direct Voice Dialogue is achieved when Warren is then actually woken up by materialized hands slapping him loudly and his own voice joins the dialogue as well. At that point in time the voices happen to appear partially so chaotically jumbled that they even appear to overlap. The quick exchange of voices, moods and spontaneous remarks are really stunning.


Besides the Phenomena control- or spirit-entities of present mediums talked about their goals and reasons for the phenomena and the objects they are regularly bringing in and revealed a lot about their real motives.

APPORTATION PHENOMENA AND THE HEALING STONES
From the beginning of the movement on spirit entities produced precious objects overhanded to sitters eventually.
Strong apportation phenomena write the history of the Felix Circle from the beginning on. From handwritings of the deceased arriving in waxballs to energy uploaded gifts for sitters of all kind and the arrival of the so called activation stones in all sizes the apports never failed to impress.

Highlight of this development are the activation stones materialized by spirit controls and overhanded to spirit workers and committed sitters who are willing to share knowledge  and time to bring people together for higher purposes. The 'Message of the Stones' can be found here, a transcript quoting the spirit itself.

'Why the eyes?', some do ask. 'Why are the spirits using the eyes for the apports?'
When spirits are apporting objects then they are always interested in that they are regarded and accepted as what they are, objects from another realm of existence.
The ways they appear oftentimes equal their special origin. During Felix Circle Demonstrations for example usually objects materialize from the several times beforehand checked bare hand of the medium in lighted conditions. In the case of the eye- or eye-ball apportations spirits are simply looking for peculiar locations at the human body to make objects appear from.
One of the most sensitive organs is the human eye. All of us know, how the eye reacts if there is only a small particle behind the lid. With bigger objects the eye usually would start to water massively, increase blood circulation and try to get rid of the foreign object and normal the situation.
Moreover the human eye of course a long history of symbolism and mysticism.

Apportation in Ibiza 2015 was happening under not less strange conditions. Mainly healing stones and activation stones were apported. Besides the eyeball- and spontaneous oral apportation one activation stone appeared during an 'Alchemisten'-Séance (Kai M.) in a very peculiar way.
A sitter described that during the séance, with the medium behind closed curtains from 'above the cabinet' with (quote) 'the most intense light flash, enough to lighten up the entire room with the intensity of a halogen beam, the larger of the two stones appeared at the end of a light beam, instantly and in perfect harmony with the voice of Hans Bender telling us what was happening as it happened, in perfect time....it is VITALY important to note that the destination of final resting for the larger stone was a good 6 feet away from the medium.
The smaller of the two, a 'Violet flame stone' was apported from under the eyeball of Kai, again not only was this done in bright red light, but also having been filmed. It was illuminated even more so by the brigthness of Julias iphone, used to record the entire event as it unfolded.' (quote end)


The object visible behind the right eye lid suddenly seemed to have vanished and Julia was directed by the spirit-control towards Kais left eye where a similiar hardened area became tangible for Julia. In the end it was the medium itself who pushed the object outwards...


Stunning are the Caylor apportations that happen inmidst of a conversation, like this one...


During a healing routine the largest of stones were apported through the mediums eyes as healing transmitters for the clients.

All participants have enjoyed their stay a lot and the wonderful atmosphere that was coined especially by our generous host Hans Schaer. May his engagement carry on to nourish the scene for a lot of forthcoming years.
Posted by KALIA Mind Expansion at 20:25