DR. BRIAN O'LEARY: 'VISITORS' USE THE TECHNOLOGY OF CONSCIOUSNESS

The so called Ufo-Phenomenon counts to the most interesting physical anomalies our world does provide. The most strangest cases contain paraphysical phenomena, just like poltergeist-similar occurrences, spontanous healing, interdimensional communicational attempts and much more. More and more mediums who build channels to disembodied spirits encounter communicators seemingly from the same area, that claim to be extra-dimensional, resp. extra-terrestrial! Their 'technology of consciousness' is probably being applied for example in the compelling work of the Australian Medium Paul Hamden, who channels baffling contents from non-human sources! All that is reason enough to let former Astronaut Dr. Brian O'Leary speak out his short, but compelling assumption on our site as well! Enjoy!

Posted by KALIA Mind Expansion at 12:02 No comments: 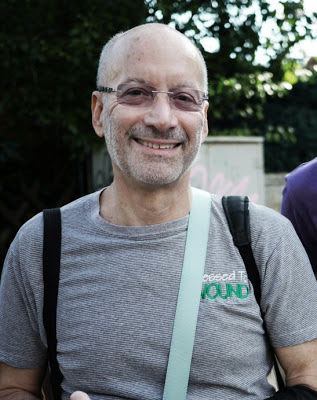 Stephen during his 2012 visit in Germany, investigating the FEG-Mediumship

Prof. Stephen Braude is a retired Professor of Philosophy from the University of Maryland, Editor of the Journal for Scientific Exploration and is for decades involved in Mediumship and Makro-PK, (especially Physical Mediumship), Consiousness- and Afterlife-Research. His books "The Limits of Influence", "Immortal Remains" and "The Gold Leaf Lady" are counted to the most valid and intellectual debate contributions of today.

Since 2010 he is in contact with the FEG and has sat numerous times during visits in Germany in Seances with us. Since then he witnessed an array of different paranormal events he describes over 50 minutes in the embedded radio Interview.

Posted by KALIA Mind Expansion at 23:12 No comments:

During the year 2012's closing seances in Basle the FEG Spirit Team allowed photography partially under unusually bright light conditions. These photos we would like to present to you today! In our humble opinion some of them certainly count to the most intruiging ones ever taken of this peculiar substance.
Moreover the photos do represent the mediumistic strength of our November/December Seances!

The 'chemists', as they are called, stand in an array of spirit guides that reach up into the higher spheres of the "enablers", where the mediums sub-consciousness is connected with mighty archetypical cosmological potentials and patterns that reveal themselves as Aliens or Gods. They seldomly speak, but everybody of us is connected with these higher entities! They allegedly enable, monitor and control the interdimensional communication to prevent space- or time-paradoxons during the communicational attempts.


The chemists use the ectoplasmsic field to interact directly and physical with our realm of existence. Ectoplasm is the expression of a creational power field, that has vital and creational qualitites and that expands into the three-dimensional space around the medium. This field is called "vital", because it acts as a creational agent on our dimensional realm. It is and can create living matter and comprises at least several creational codes of our dimension. Because of that it is able to form human forms like it happened during the heyday of Spiritualism - in FEG Seances for example hands, feet, ears, heads, faces, baby and embryo-like forms, man high columns and lights were observed.

At the same time the ectoplasmic field or substance is able to read subconscious patterns and creates dreamlike structures and forms that touches the onlooker in a certain not yet understood manner somehow deeply. Ideoplastics, these creations were called during the scientific research days of Physical Mediumship in Germany!

The threedimensional "rigid" field, the main spirit control sometimes calls it, is able to build up like a threedimensional net-like structure into the room. Along its powerlines, that can sometimes become visible or palpable and appear like thread-like support-structures or sticky wire-like extensions certain "compactions" can build and separate from the main structure and appear then like autonomously acting structure inside of the Seance Room.

But not only our consciousness is connected with these controlling higher organized principles, our body is it as well. It offers several access-points from and to parallel, resp. higher organized dimensions and their inhabitants, like discarnated souls and much more.
One of these entry points lay at the rooftop of the mediums mouth and is mentioned for example in the Atharvaveda-Samhita-Vedes as one of the points where deities, higher organized entities have access over the human body. In India some of the Yogis, that have exercised over decades the abstinence of food, are fed drops of mysterious liquids (mana) over their mouths rooftops by their "controlling" gods or goddesses to let them survive...! That mysterious entry the FEG-Entities use to "produce" ectoplasm via the FEG-Mediums body on our three-dimnesional realm.

But for what purpose, many ask.
The exhibition of an unexplained substance flowing from the mediums body, showing its living and breathing features, its ability to form human forms is a demonstration of their control power, the building of subconscious and or dreamlike patterns demonstrates the fact, that our mind reaches far over the boundaries of our body and has creational potential too, the exhibition of heads and faces is to demonstrate their ability to connect sitters with their loved ones, that are always identified within the ectoplasmic mass.

It is a fully new awareness quality in regards to the mediumistical creational process.
The entities show, that they can alter and create matter and transport us higher in our awareness in regards to the possibilities of spiritual healing, consciousness-expansion and survival!

Under these presumptions we would like to present to you the mentioned photos!
They were shot at the end of 2012 and we understand that given opportunity to photo and catch these intruiging scenes on digital photo as a christmas- or new years-eve-gift!
Some of the photos will be given additional explanations besides their own captions! Please read both!

In regards to suspicions towards the substances origin, we want to state, that after the very overviewable Seance-Room was searched with great care (18 chairs, a cabinet, a small wooden table), the medium was previously to every of the mentioned Seances completely stripsearched, showed cooperatively the area below its belly and every other part of its body where material could be concealed, identified every natural content in his small underpants and went with hands held in the air (to show it doesn t grab for suspicous props on its way to the seance room)!
Later it always seems as if over the course of the seance the substance is displayed in such amounts, that it becomes obvious or as if to prove, that it could not have been hidden anyhow at the body beforehand, even if it was highly compacted! The mediums wife undergoes a body search as well!

The photos can be enlarged by clicking onto it! 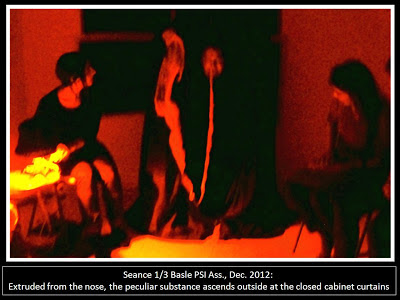 The last three Seances at the Basle PSI Association represented the end of a phase of quite a lot sittings end of 2012.

The photo show the strange ascension of ectoplasm that has found its way from the mediums body via the nasal orifices... (click on the photos to enlarge and see details) 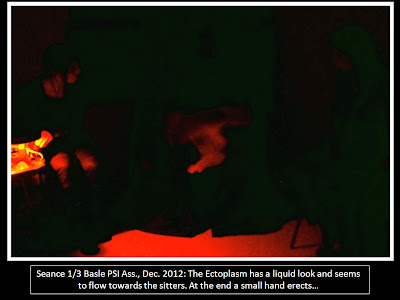 One of the handforms, comparably small, that are usually developing from ectoplasm in our seances. In that particular case it did build at the end of a streamlike flow towards the sitters... 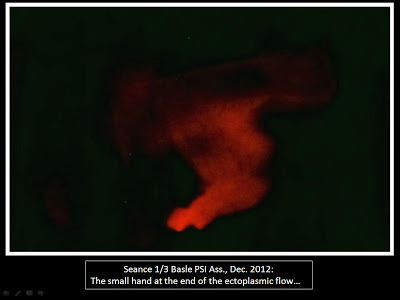 In the enlargement one sees the inner structure that follows the dynamic of the flow.
Oftentimes the ectoplasmic display seems to show a large incompletion in comparison with actual human hands. They are ectoplasmic recreations and their perfection depends on several conditions... 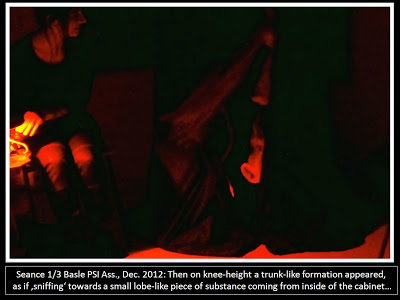 Regularly photos reveal moments in time resp.creational aspects that would stay unrecognized, if they haven t been caught on film. This peculiar tube and its strange interaction with another substantial piece can be clearly counted to that! 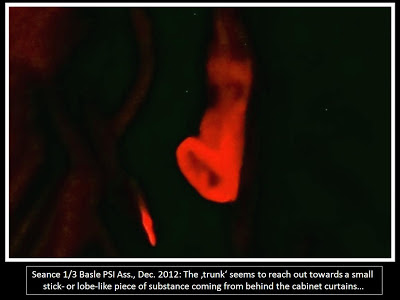 The enlargement shows a little bit of the capabilities of the form building processes as in many
other earlier photos! 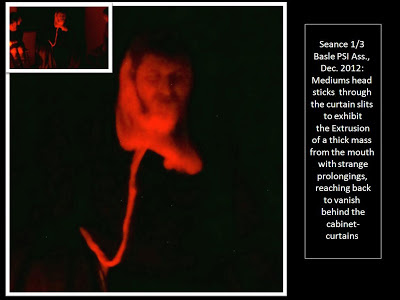 In the next photo meanwhile the substance is extruding in thick volume from mediums mouth (and ears?), mediusm head is at the same time fully enwrapped by a very thin layer of the substance... 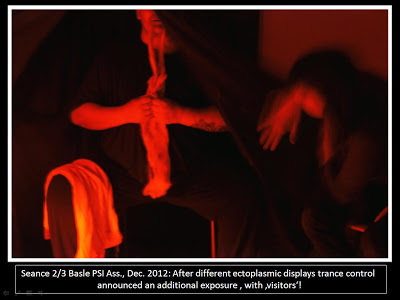 Like many times before the controlling spirits somehow manage to integrate faces as if photographed into the ectoplasmic mass. This phenomenon is known since Hamiltons experiments with Mary Marshal in Winnipeg and can be looked at on this website. 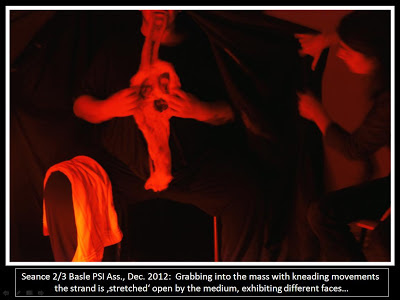 Regularly these faces are during the seance recognized by certain sitters as it has happened as well in this instance. The faces are exhibited a comparably long time to enable identification. Oftentimes the sitters are allowed to stand up and group closely around the cabinet to evaluate the faces embedded. 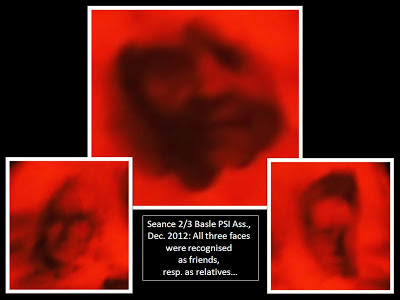 Interesting it is naturally to have these faces and their peculiar expressions on photography...
They came forward when the medium worked at the substance as if it is clay and stretched it open finally! 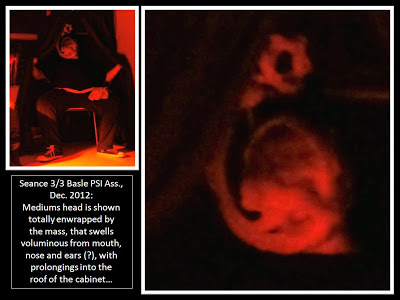 Another strange display, as the substance volumes up in front of the mouth and develops additional prolongings reaching out into the roof-area of the cabinet. 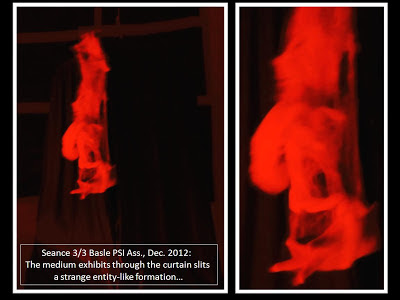 Many can see a strange figure here (right hand side), a dreamlike entity with head, belly and bird-like feet. Its eyes are closed and its face, looking to the left, seems to express a peaceful state. Its eyes are slightly looking mongolian and the whole substance arrangement is looking extremely alienating. Is this an entity from the mediums dream-state or subconscious or does it represent something else? 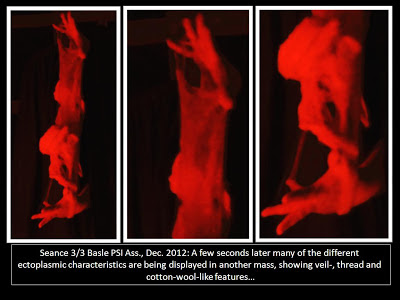 A few minutes later another display is exhibited showing the many substance-features of the FEG-Ectoplasm all together in one arrangement: very good visible are the fiber-like extrusions that for example seem to be projected from the lower left hands little finger! 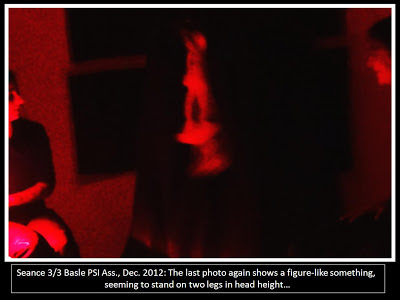 With these images we like to welcome you into the new FEG Year 2013. Come and explore with us the amazing secrets of the Seance Room and its controlling entities!
May we all become massively enriched by 'it'!
Posted by KALIA Mind Expansion at 16:13 No comments: