EXPERIENCES INTO THE DYNAMICS OF FULL FORM SPIRIT MATERIALIZATION AND OTHER PHENOMENA WITH PHOTOGRAPHER SHANNON TAGGART VISITING - by Julia and Kai Muegge (powerful photo- and video-content!) 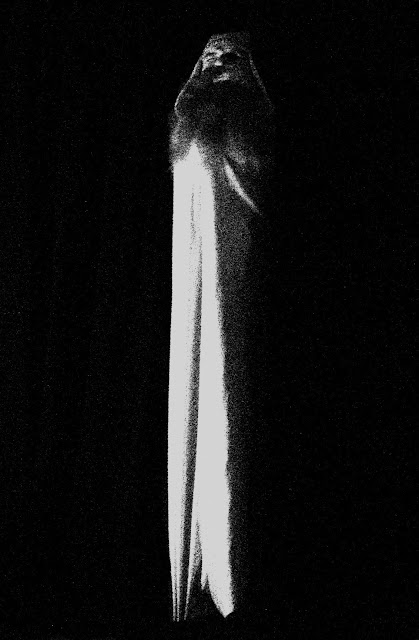 It was the third day of succesful séances. Séance already had begun. And around 25 sitters were present at the BPV, Basle, Switzerland that night. But nobody knew about the amount of pressure the medium in the cabinet was under at that time.

An American Guest was there, a professional photographer and friend, who had in the previous nights shot ingenious photos, had purposefully come to witness one of those powerful Full Form Materializations. Shannon travels around the world still collecting materials for an upcoming book of hers about séanceroom-phenomena, that actually will be amazing!
But the medium inside of the new cabinet in the meantime had detected conditions unrelyable for an attempt of Full Materialization actually and started to foresee it would not happen: The curtains were not closing towards the floor and light was coming in. The walls had a bright color in the cabinet and the incoming light was reflecting and illuminated the confined mediums space in a way that only hardly could be overcome, due to the need of total darkness there ...
It was a new cabinet used for the first time ever in that built and size, due to the spirit controls wishes, with a totally different amount of space available inside and with another angle to sit inside and towards the sitters and towards mediums wife and trustee also - ending in such a totally different feeling that usually would need a necessary time to accustom with first before getting back to common production-processes inside of it.

But Shannon was there too. And she had specifically come for one of these Full Materializations, the medium knew very well. Of course Shannon herself was educated enough not to put any expectation pressure onto the medium, but Kai is doing that to himself anyway. He likes to be able to fulfill expectations of course. No, that is not optimal, but that is the way it is.
So despite the deficient pre-conditions, the medium during the trance induction did fully focus and concentrate to receive a materialized spirit-guest, not thinking about any unforeseeable results coming from such an urge put upon the spirit team and spirit control.

A STRANGE PREMATURITY
For the sitters everything seemed to be developing normally at that point in time and their outlook was promising like always, when the Communicator announced  a special spirit guest, a predecessor of Shannons work and famous spiritualist, later founder of the Theosophical Society with Helena Blavatsky, Henry Steel Olcott.
As a renowned contemporary, he came from his service as a Colonel from the Civil War, where he owned honorings already, and became a journalist and Psychic Investigator. At the brink of the Modern Photography Era he in the 1870ies was for example reporting and thoroughly depicting with his own drawing skills what he witnessed at a rural farm in Vermont, at the foot of the Blue Mountains, where the then famous Eddy-case was evolving. For a newspaper he was at the location for months and documented what later became a famous book 'People from another world'.
He did then, what Shannon Taggart as a photographer is doing today. And his visit as spirit form was a reminiscense to his connection with Shannon. Later he became the confederate of Helena Blavatsky in founding the Theosophical Society in London.

In the séanceroom in the meantime an extraordinary and unusual development was going to take place. After sacred objects had usually been charged by massive outbursts of light of different colors at that time the spirit control seemed to direct all available energy to follow the wish of the medium. The late Henry Olcott was announced by the communicator to materialize and the sitters now awaited another impressing appearance like all the times before! The amazement rose when the red light was distinguished and everybody was waiting for the communicators call for the light the next time,because at that point the Phantoms have usually achieved sufficient density and visibility for their appearance and could be looked at. Not this time...


LIGHT STREAMS THROUGH THE PORTAL
Suddenly a strong blue light never before seen in the cabinet emerged from it and only seconds later the knocking sounds signalling also the want for red light occurred and Julia switched it on: An unexpected strange sight was awaiting the sitters. It took a few seconds to fully fathom what was displayed here. The blue light illuminated the cabinets whole inside strongly and in the entrance stood a strange looking more young man with a very extraordinary, nearly deformed thin nose, upperbody bent forward showing his dark blond hair, half of it covered by a too small white head-dress. The beard seemed strangely half-grown, as if interrupted inmidst of a process of growing. The white robes or garments the entities usually were wearing was reduced here also to one unique poor piece of white fabric, letting the blue light even shine through the lower part of the entity. The visitor was exhaustively looked at but didn't respond like usually and seemed to breath heavily. When the red light was switched off the sitters were irritated and the communicator immediately restarted to speak. A coin dropped, an American coin from 1872, one of Olcotts most active years, a message was delivered and the spirits brought back an extremely exhausted medium. One thing became obvious, the pressure onto the medium produced something that was far away from all the other quality attempts for Full Materialization in the last two years.
Kai understood very quickly what had happened and that the pressure he had put upon his trance-state had produced  literally a mediumistical preterm-birth.
TO BE CONTINUED.../THE FIRST AND SECOND DAY/SPIRIT FACES IN ECTOPLASM
Later the spirit control did let everybody know, that Henry Olcott would return to the Basle PSI Association when the conditions were right. Two weeks before another stay at the Basle PSI Association would be happening the other photos of 'Henry Olcott' were produced at a private séance and do look very promising.
In the days previously to the difficult materialization attempt Shannon Taggart of course had photographed other interesting events in the séances already
.

GEMSTONES FROM THE EYE-SOCKET
Extremely fascinating are the moments within a séance when in red light the spirit control uses the body of the medium itself to give spiritual gifts to the sitters. Then from the personally checked bare hand objects fall into a sitters hands held below. Or when the spirits express their 'delight' - usually immediately after the hand episode - all in continued red light - and deliver little gemstones and/or glass-artifacts from the mediums eye-sockets ususally in high quantities. More than a dozen of objects have been observed exiting the mediums eyes then. Usually at the same time objects exit the rest of the heads orifices as well, like the mouth, nose and ears. More than 70 single objects could be count that way in séances of the past.

THE ECTOPLASMIC ARM FROM THE MOUTH

By now only drawn in sketches for the first time extrusion and movement processes could be photographed by Shannons lense. Several videos were being made by the stills. Originally photographed in red light, parts of the process are also be shown in a false color video to give the observer another view onto it to complete the impression.

Video 1 is showing the whole complex extrusion plus the weird autonomous gestures of the ectoplasmic hand...

THIS AMAZING ARTICLE
This article with its amazing materials could not have been presented to you without the work of Shannon Taggart and her untired support. Our very special thanks so go this time to her in the first place. Inevitable is the ground-breaking work and support of the Basle PSI Association and its President Lucius Werthmueller and Partner Sabin Suetterlin plus Event Organizer Therese Hartmann. Their years long support made all this possible here as well. And then there are specifically engaged private organizers involved like the entrepeneur Markus K. from Switzerland, who is responsible for all the fascinating shots of the second Henry Olcott Materialization.
And then we say thank you to the interested reader who is with us on this journey!
Lets always remember, when we look at these fascinating visual contents that there is a spirit message that needs to be heard and which is more important than any physical phenomenon.
THANK YOU!

She did it again. Well known movement-artist and professional photographer Shannon Taggart again shot intriguing photographs about the Mediumship when visiting us over three days in Switzerland. She is breathlessly at the pulse of international Physical Mediumship, a friend and a well received guest. Stay tuned for the report coming up with her new and amazing photo- and video-content (from speed photography) she has created during her stay.
Read the full story about Shannon Taggarts stay, the photos, her mission, the Materialization of Henry Steel Olcott and Shannons amazing upcoming book soon, here on THIRD MILLENIUM MEDIUMSHIP.

Posted by KALIA Mind Expansion at 04:48 No comments: