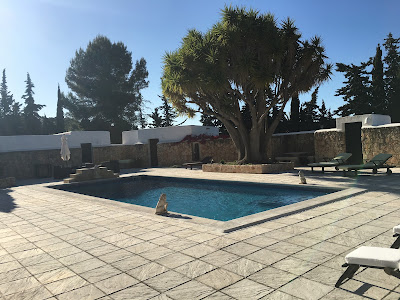 Like traditionally every year 2017 held 10 days ready for a group of people to share time and mediumistic faculty. Beginning with the legendary Scole Group visiting the Hacienda de Bougainvillas in the late 90ies and then Physical Medium Stewart Alexander (now retired), entrepeneur and original Scole group temporary member and investigator Dr.Hans Schaer, who owns the premises carried on to invite yearly available Physical Mediums to let them share and perform together until today.
Together with the mediums were always those invited who were close to them naturally, experimenters, investigators, friends. Like in the past Robin and Sandra Foy or as absolute regulars until today, Basle PSI Association host, Lucius Werthmueller and his partner Sabin Suetterlin.

This years list of guests gathering around the mysteries of Physical Mediumship included U.K. Medium Warren Caylor and Ire Bill and Colleen Meadows (plus brother Chris), US based Medium Mychael Shane and his wife Pamela, highly gifted Switzerland Medium Bea Rubli, sensitive, medium and author Brigitte Balzerini, investigator Prof. Eckhart Kruse and his wife and therapist Heike, Basle PSI Association activist and organizer Therese Hartmann, Philantropist, Author and Investigator, President of the Basle PSI Association Lucius Werthmueller together with his partner, Sabin, who is additionally a professional translator besides her important varied involvement in the Associations work, Dr. Hans Schaer of course and Julia and me.
Financed the Ibiza days were like always by Dr. Schaers 'Riggenthal-Foundation' for the 'Investigation of Rare Forms of Mediumship'.

All in all following seánces were being held, resp. given.
At the second day the participants already present opened the Mediumship days with a formless advanced table sitting, present mediums were Muegge, Meadows and Bea Rubli.
In Switzerland Bea is widely known for her highly inspired mediumistic sessions. Her years long involvement with Physical Mediums eventually made her a developing Physical Medium at the moment herself.
In that opening session, motivated by Julia and me, mainly our Felix Circle spirit team, but also Meadows', acknowledged their actual presence with their typical anomalies and phenomena. These were mainly well known transportations of objects located around the sitters space, rhythmical drumming of a drum standing lonely in one of the rooms corner, a guitar playing in another, tiny little pinpointed lights appeared from under the ceiling sailing down to the sitters, raps, touches, table movements and levitations and so forth.
And inmidst these very FEG-typical activities suddenly Bills control 'Mary' started to speak and acknowledged Bills team presence also...!

Bill Meadows then held an own séance, then Warren came and held a séance, then we held a cabinet séance with overwhelming ectoplasmic presence and meaningful formation, then Warren held a second and a third one (table séances, after his cabinet séance), then Mychael came and did an apportation and a red light séance, then Bill gave another, resp. a last one, if I remember it rightly.
These séances were all beautiful in themselves but there aren't any protocols existing, we could report from in detail.
That is why we will give you with the upcoming photos some impressions from my personal memory over the days and telling the one or the other anecdote from the days.

The first photo (first photo above) shows the inner area of the hacienda, the pool and some of the doors that lead to beautiful rooms for different numbers of guests, all with own bathroom. The weather was without exception beautiful over the ten days we were there. To the right of that perspective invisible on the picture lays the so called pool room, in which in the last five years all séances were happening. 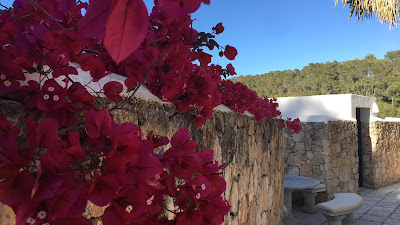 The Hacienda, that offers room for at least 16 guests lays deep within a green valley of pine trees and orange plantages. Its name is due to the rich growth of the plant or flower 'Bougainvillas' on the Finca that appears in different powerful red, blue and white color everywhere and this is the first photo taken showing this beauty. 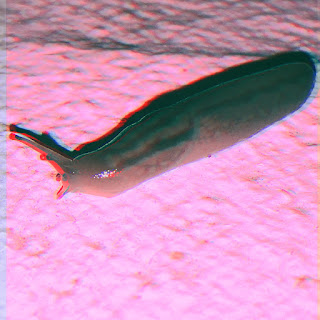 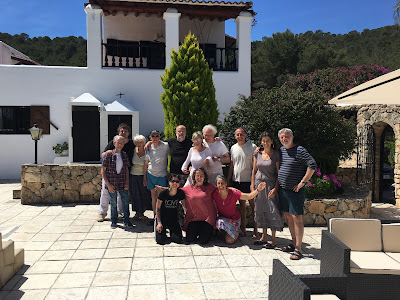 The day US trance-physical medium Mychael Shane and his wife Pamela flew in, those already present made a welcome photo for them who would be with us for the first time.

The evening before was our Deep Trance Séance and the 150 birthday of Albert Freiherr of Schrenck-Notzing, this extraordinary pioneer of the scientific exploration of Materialization mediumship ('Phenomena of Materialization' 1913) in Germany, friend of Richet - and a leading part in the FEG spirit team of helper personalities in the spiritual realms. In the course of the evening his torso appeared on first sight two-dimensionally within layers of ectoplasmic substance on the chest of Kai and all present were invited to step forward and observe close-hand the strange lively features these images often have appearing within ectoplasmic mass...!

One of the first-time close observers were Prof. Eckhart Kruse and his wife Heike and both were describing the same strange ongoings, Author C. Dresbach already had described in a previous article: 'The image looked extremely lively, even though it had obviously characteristics of vintage photography, it suddenly was getting a life of its own!", Prof. Kruse remarked after the sitting. Moreover the presented images resemble strongly well known photographies of the depicted personalities and the spirit controls comment that they purposefully depict the personality in the ectoplasm in a way the audience is used to identify them, like for example by showing them like in well known photos - specifically concerning historical personalities. They would be hard to identify if we would have to identify them in never before seen poses or persepctives. Their strange lively appearance is probably due to the fact, that they are depicted on a lively ectoplasmic background!? 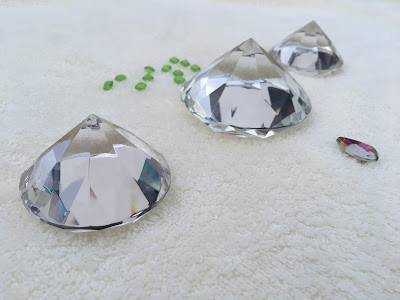 Besides a lot of mysterious spirit light apparitions, for example revealing in the dark a long armlike appearance with a filigrane hand coming from the ceiling and prolonging into the mediums lap, from the lights also huge objects emerged and fell onto or appeared suddenly on the floor. The many green tiny stones depicted on the image above came from the mediums eye-sockets and like always  philosophical contents were shared with the sitters. 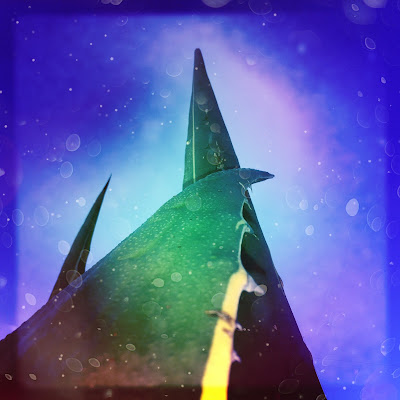 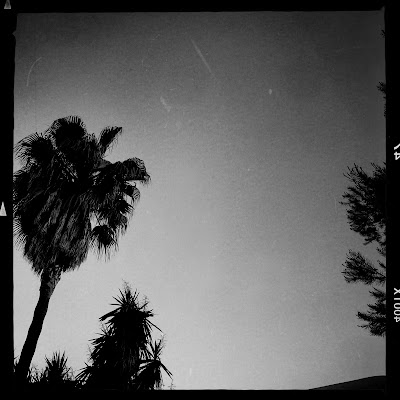 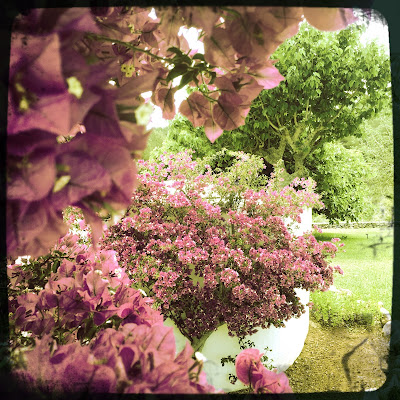 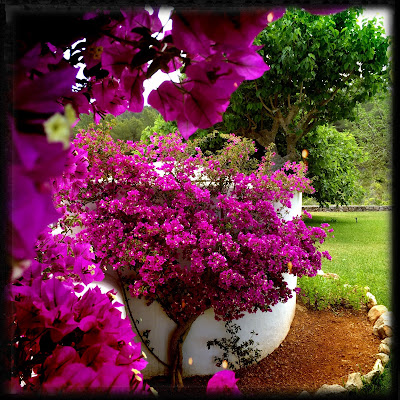 Bill Meadows demonstration happened after a considerable pause in his carreer. But very quickly the trance personality 'Marie' overtook the routine and overwhelmed like always the audience with her unique child-like originality. In front of that background a face appeared above the plaque, instruments were being played, hands and touches appeared and happened and several objects were manipulated and personalities like Jonathan and Father James fought their fights (of words), representing the difficult experiences of the Medium in a catholic Orphanage as a child.
Shortly later Warren arrived and started with his séances more or less immediately. Ectoplasm was shown starting to emit a faint glow, personalities spoke from different locations, ectoplasm exited mediums body, objects were taken and flew through the room or appeared from nowhere. Like with Mychael, also with Warren inmidst of everydays actions suddenly objects appear, in the salad, in soft drink cans (yeah, of course red bull), rings, stones, sacred materialized objects...
Then Mychael arrived late but like always fully present and with his very sympathetic wife Pamela definitely an enrichment. First evening he sat besides me and ate with huge appetite, when Prof. Kruse made a joke about apportation and held his both hands into the direction of Mychaels mouth and just wanted to retreat them again, when Mychael, still chewing on his meal, signalled him non-verbally: 'No, keep your hands there!', and so did Eckhart.
Pam said: 'He is apporting!' And out of his mouth suddenly a not too small artifact (photo) appeared. That was a 'Wow'-situation for all observers.
In another apportation séance Mychael spouted like regularly hundreds of gemstones or semigemstones and different rings and gave them to the sitters with a message from the Ascended Masters. But Mychaels gifts go beyond his apportation abilities clearly demonstrated when he is doing billet reading. Quite impressing!


Even though all séances were basically succesful actual synergies couldn't be worked out. But maybe that is too much wanted when you come together only once a year. Nevertheless the Ibiza days were again a unique event that will be happening in the upcoming years as well as far as we can say.
We say thank you to all those who organized, financed and did else to make the week a success!
And to the reader: Thank you for your interest.

SPECIAL THANKS TO CHRISTIAN BRITZEN
Posted by KALIA Mind Expansion at 14:53 No comments: