TWO PRIVATE SÉANCES AT MY HOME WITH K.M. - PART ONE - Independent Report by Healing Practitioner and Information Scientist Ute S.

(Author Ute Sautter, born 1959, is one of these rare truely gifted mediums and professional practitioners in the field of the etheric. Already trained as a professional dowser 1994, the information and computer scientist became a professional healing practitioner with several trainings starting 2000. She published together with Dr. H.Wiesendanger, a renowned holistic scientist and healer in the german-speaking environment. From early years on she always received extra-sensoric information and became also a scholar at the Arthur Findlay College to complete her skills with additional trainings in Germany.
She is today herself a well-known professional healer, working medium and animal communicator in a successful own practice in the south of Germany. She is a gifted trance-speaker and active in Physical Mediumship for several years. She has early involvement in the Felix Circles work and visits circle, members and medium K.M. for years. Frequently she invites and holds private séances with the Felix Circles Medium in her own rooms in M.)

Here comes the report of the Private Séances held 18/19th of February 2017, for guests of mine in M., by Mr. K.M..
K. is the deep trance medium, the Physical Medium, of the German Felix Circle.
He was demonstrating mediumship and spirit interaction Friday and Saturday night.
Friday more than the half of the sitters were totally new to such processes resp. to physical spirit phenomena generally.
Saturday only sitters with extensive experience in sitting for K. were present.

A LITTLE HELPER SPIRIT, A CHILD IS INTRODUCED AND WE HEAR THE LUMBERING STEPS OF TINY LITTLE NAKED FEET RUNNING OVER THE FLOOR

My husband is the independent controller holding the medium at arms and legs together with his wife in front of the cabinet.
Already early the first lights start to appear in front of it.
The spirit 'Hans' greets the sitters.
They are eagerly singing and a multitude of touches are experienced.

A little spirit visitor is introduced by the spirit control 'Hans' through the controlled and held medium, and we hear its lumbering steps on the floor. Shortly later the turned around bucket is being drummed on by him, the rattle is being thrown and then pushed by the little spirit boy over the floor! We clearly hear tiny naked feet on the wooden floor and 'Hans' remarks jokingly he shouldn't get a cold that way and starts laughing his overwhelming 'Hohoho'.
After the spirit had gone the illuminated balls-experiment is executed and the glowing balls are clearly manipulated by the 'spirit-energies' in an unreachable distance from the fast held medium.

Following, the shiny plaque is focus of the next experiment. Unfortunately this time no handform does appear as it should. 'Hans', the spirit control is speculating about the new sitters unprepared energy fields to be responsible therefore. A new form of control was installed also. Frequently during the séance the holding-controllers of the medium report the state of their duty to the rest of the sitters.

A NEW FORM OF MEDIUM-CONTROL

Somewhen that evening Julia was leaning over the medium and gave her both hands and Kais she held into my husbands hands. Usually it is the other was around and the independent holder leans over to Julia and checks her control measures executed at the mediums body.
Afterwards different apport phenomena were going on. A sitter was getting a buddha-medallion materialized, into her cup-forming hands from a flash of light under the mediums hands.
Another sitter was asked to sit right opposite to the medium and after checking K.s bare hands, they were held up high for everybody to see and into the sitters lower held cup-formed hands an apport materialized falling down from above as well.
With a shiny bright light it was a Ganesha figurine falling down.
All these objects are, following the spirit control for sitter conversation 'Hans', imprinted with specific information and energies for the chosen receiver, helping and supporting him in his goals.
One more apport phenomena was actually happening. This time introduced by a bright light coming from under the rooms ceiling.
It left behind two clear Activation Stones in front of some sitters feet. 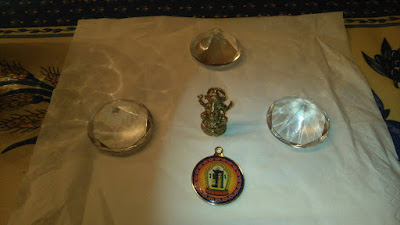 It is vitally important to clearly state, that the medium was always in a controlled condition!
Specificly meanwhile spirit powers are active in the room, the spirit itself asks for tightening the controls of the medium Kai and his wife repeatedly and untiredly.
Then it came to another 'Clear Activation Stone'-apport, also facilitated with a blinding light through a mediums hand into the hands of a sitter. (For red light episodes like this the medium is allowed to stand up after having been released from the holding, editor)
Then another classic was announced. The spirit control asked mediums wife to make ready the glowing-in-the-dark handkerchief. Hans then requested to overhand it to a specific sitter somewhere in the darkness of the room.
This lady-sitter was holding the hanky then at its corner and early spirit-forces were tearing around at the piece of cloth. The lady held it fast and strong and it danced underneath her hand a wild dance. When the energies had buillt up and were capeable obviously to overtake it, she let go and it started to float over to the other side of the circle and landed there on the knee of an opposite seated lady.

We moved towards the end of this intensive evening.
Spiritcontrol 'Hans' announced the 'secretion' of ectoplasm now through the mediums body.
Under a low red light all sitter could observe, how the medium gathered the strange mass from its mouth. A huge amount of ectoplasm, looking like a thick, white, fibrous strand, exited more and more the medium. Eventually it seperated from its host and layed as a huge white mass in front of the mediums feet. Soon it started to pulsate´, to 'breath' and a hand-like form was building from it. The form became more and more clearly identifyable, it gained more and more ectoplasmic completion.

But because everything seemed quite exhausting for the medium today, the end of this quite adventureous evening was announced by 'Hans'.

And even though several first timers were present (and the spirits usually act reluctantly), the old-timers considered the evening extremely interesting.

(stay tuned for the report about the second séance specifically for experienced sitters - in how far have there been differences, if at all?)

Posted by KALIA Mind Expansion at 19:01 No comments: