For several years now it is tradition that befriended International and National Mediums visit Kai and Julia Muegge in Hanau to consolidate their Mediumships, work together in combined sessions, gain access to yet unrevealed spirit guides through hypnotical routines and let the 'Alchemists' (Felix Circle Spirit Team) work with them. Only the closest family members are accredited for these sessions with our private guests.
These weekends are then characterized by a high grade of individual uniqueness and specific combinations of present psychic/mediumistic dynamics of the participants who all with their individual assets take part in the unpredictable but always surprising whole.

This time a long termed connected mediumistic couple from Germany was visiting. And the weekend was following their main goal that was wanted to be achieved and a strict and rich list of entrancement and advanced exercises. End of the third day we together had reached the point from which both were enabled to lead their first successes into an applicable routine for different thinkable mediumistical frameworks.

Like always the entrancement and trance exercises for our guests were enriched by different sitting settings. This time we were in the position to observe a very unusually lively form of transfiguration coming with the male part of the couple. For a certain time now during his cabinet sittings D.C. recognized a strong urge to grimace ending in a constant flow of different mood-related faces rushing over his face. Meanwhile photographed it looked a bit as if a simple 'making faces' was happening the actual process is pretty impressing because of the speed and intensity the partially high strangeness faces appear.
Even though the photographing basicly is not actually showing the grade of lively strangeness going on during the process, some of the photographs we have shot do give an idea of what is going on. 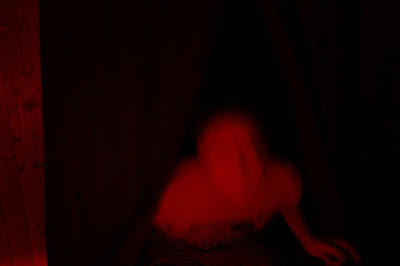 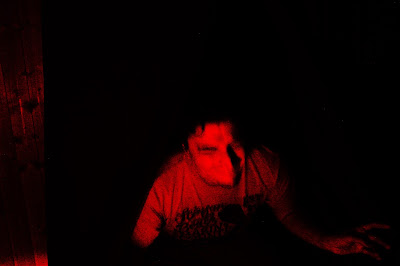 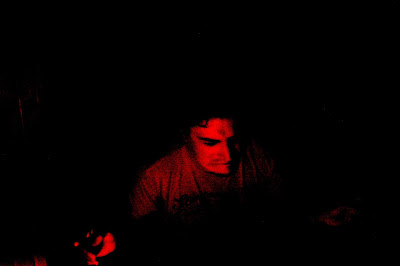 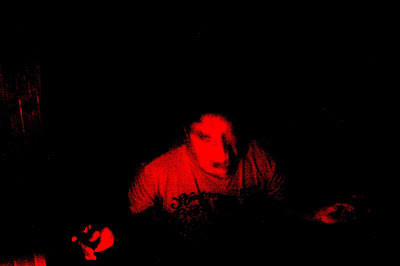 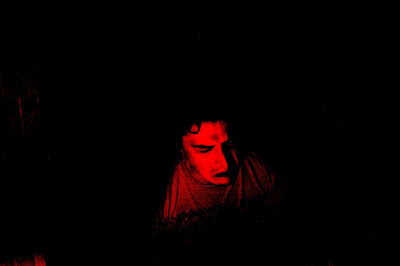 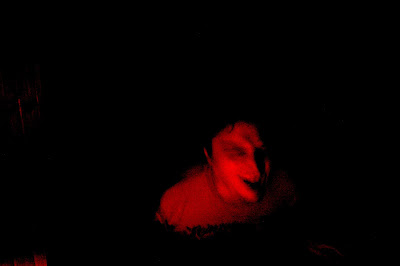 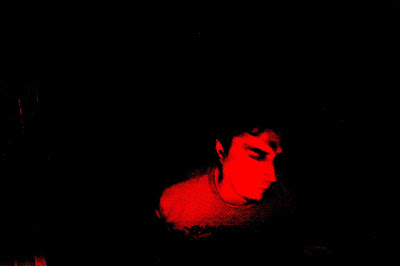 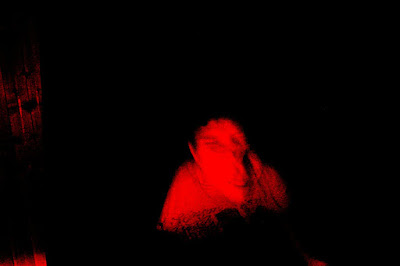 We have purposefully given the pictured process something back by longer exposures, what the photographing process had taken from the permanently morphing lively process of changing faces.
Over the course of the weekend we believe we have found out more about the nature and the purpose of a certain group of entities seemingly showing off regularly during D.C.'s experimentation.

The other sitting settings showed a variety of known and unknown phenomena like for example a cascading of red lights seemingly like cordonning off the center stone in the corner of the séance room. A very impressing display all were observing. At that time it was again our guest D.C. who was in the cabinet in trance. A hard to describe thing then happened there. It reminded of modern light tubes, as if the corner of the room was cordonned off by such tubes and we observed the lights sent through them. Extremely rare this sight was and the present Felix Circle Staff only remembered one other instance when a comparable display might have shown off.

Meanwhile the session with D.T., D.C.'s partner, seemed more to attract very varied knocking sounds that moved in strange patterns over the ceiling and walls of the Séance room.
The first and initializing session held on Friday had a very special moment when the very heavy cabinet chair standing suddenly on the séance table, obviously having overcome the distance of about 8 foot (2,5 m) meanwhile the group sat tightly around the table. It was so clearly a paranormal action because it was so obviously none of the present humans who stood up in the dark, reached to the chair in the distant cabinet, took down all the instruments, that were laying on it and then brought back the heavy leather chair and hauled it over the heads of the sitters onto the table.
The spirit controls did it within seconds! In that session Kai, the regular medium, was sitting un-entranced amongst the rest of the sitters.
The last sitting with D.C. in the cabinet we again had such an undetected transport of huge objects through the room, with all participants sitting in a line in front of the cabinet. Directly before the cabinet this little chair was positioned and we had put an illuminated handkerchief onto it. This quickly landed on the floor and very quickly was moved over the floor until it tried to encircle the cabinet and seemingly was stuck under the folds of its cloth. We were all so taken by this active illuminated handkerchief that moved from left to right and right to left until it vanished as described, that we had lost sight of the table that was very well visible in front of the moving lights of the handkerchief on the floor. Even a few knockings were heard then but not as powerful as with D.C.'s wife the day before. Anyway, a sudden flash was coming approximately from the window (on the photo over the bent of the black arrow you see the lower part of a black frame: the taped window! From there all participants outside of the cabinet saw the flash emerging.).

At that time, approximately with the flash coming D.C. in the cabinet had strong visual impressions to say the least and recognized that something was frequently pressed against his foot.
We lit up the lights and found in front of the cabinet the huge new Center Stone. In the prefield it was told the stone was basicly materialized for the publishing efforts of D.C. for the crystaline network.
We recognized that the small table in front of us was hauled over us into our backs and put onto the put aside seance table, that stood there in our backs.

At the end of the weekend the participants reflected about the rich days and expressed their favour for the idea of a network existing solely from its active parts, no directors, no chairmen, only spiritually seeking people who work to define the network by spreading its unconditional social laws of love and compassion and forgiveness!

A new website will show international network connections to all participants! This will define the network very well and help it to reach to its paradigm shift we are seeking for!

Activate the Crystaline Network: Love one another!

Thanks to the visitors of the weekend!

KALIA
Posted by KALIA Mind Expansion at 22:58 No comments: