INTERVIEW WITH A POLTERGEIST / ENFIELD REVISITED 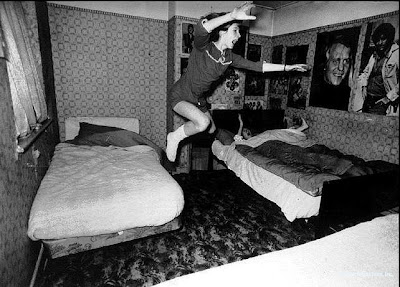 One of the most controversial RSPK-Cases of the late 20th Century was the Enfield Poltergeist Case and I consider everybody of you has heard about. Maurice Grosse and Guy Lion Playfair were beside some news-men and -women the main researchers in the case.
These news(wo)men have made many photographs, under them the well-known ones of a hovering child above its bed - paranormally levitated or jumping - which the most looking at it today dismiss it as hoax or at least not hard evidence and close the case.

That the case is worthwhile to take a closer look and much more elaborate as many sceptical researchers claim a recent documentary disclosed, we want to present today.

Before the documentary starts we want to show you that some of the sceptical claims regarding the case are simply not true, even if they are repeated again and again.
Claim: No photographic evidence of paranormal events.
Despite the fact, that paranormal events somehow regularly are not easy to capture on film - and there are some models in todays physics that maybe explain why that is the case - this time actually unexplainable events could have been captured on film that seem to show real paranormal effects - besides the "Flying Girl"-episode. 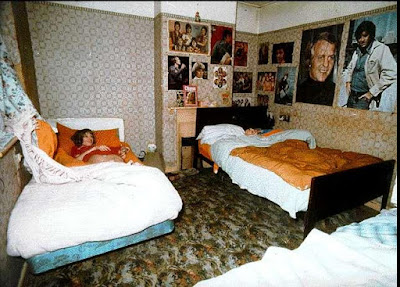 In this first of three pictures that were taken every 2 seconds we see the possibly paranormal contortion of the bed-sheet with the curtain. 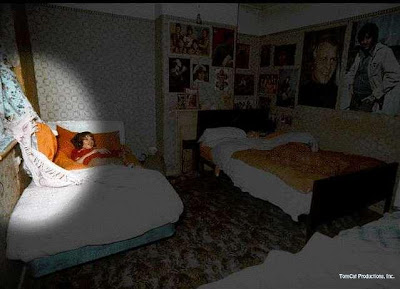 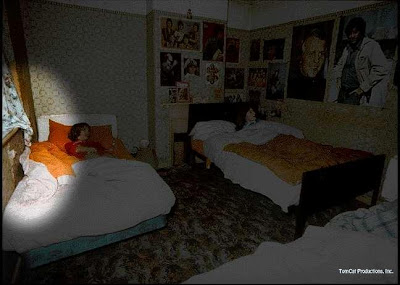 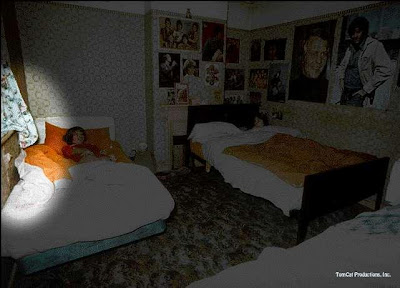 A second event was captured by the automatically firing camera when something strange
happened with a pillow: 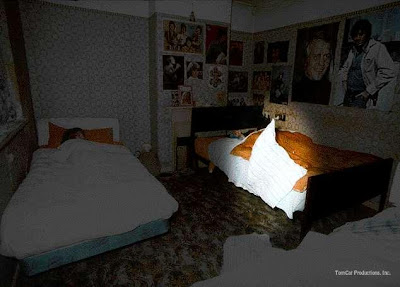 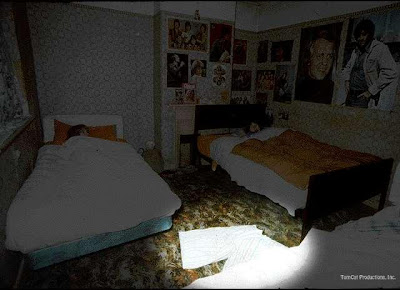 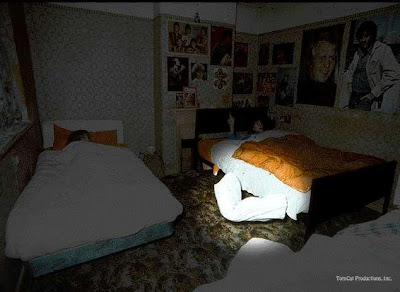 The photos seem to prove that Janets sister was not involved in bringing the pillow from the bed.

Claim: With the late bizarre twist of the case it discredited itself for the most researchers because of its very high strangeness
Enfield wasn't the first Poltergeist-case where unexplainable voices appeared.
Independent from the question, if these growling voices really did not come from out of the mouth of the eleven year old "Janet", the case made that fascinating turn indicating many new possibilities ranging from an unbelievable sociopathic behaviour of an eleven year old unto the possibility that there really was a deceased spirit possessing her and speaking out of her. At last the survival hypothesis became more substantial because the voice made extraordinary claims about its origin and not only that. The "Interviews" made with the entity revealed the personality, characteristic speaking manners and informations not available for Janet of an embittered old man, who allegedly once died in the Enfield house, before the Hodgons family moved in.
Could these informations have been verified by the researchers team? And which incredible occurrences other credible eye-witnesses have observed?
Start the fascinating documentary below with Part I! 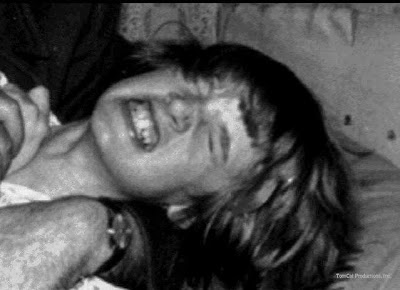 Janet in one of her trances, that occurred later in the case, shortly before the unidentified voice appeared.

click (read more) for the other parts of the documentary:


Posted by KALIA Mind Expansion at 18:49 4 comments: Links to this post

Email ThisBlogThis!Share to TwitterShare to FacebookShare to Pinterest
Labels Videos

Today we present to most probable best copies of existing Margery Photos. They are scanned originals of early copies out of private collections presented at a Metropolitian Museum of Art-Exhibition. 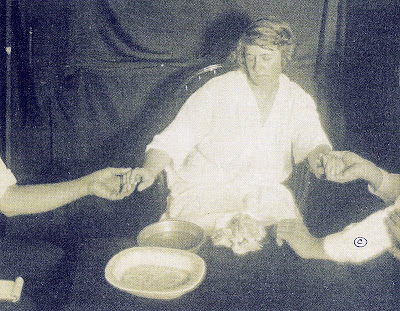 Again we see above the instance when the malformed hand of Walter appears to left his finger-print on dentist-wax. Also regarding the other photos completing this event (see Eclectic Margery Part I) one could ask, how Margery may have produced it by trickery. The hand seemed self-animated and after imprinting in wax it shook hands with Dr. Richardson (see The Eclectic Margery Part I).
Somehow one gets the impression regarding the photos, Margery may have disguised her foot as a hand, although there are other photos, where this can be excluded. But may it be the case in this instance? On the other copies from Part I you can see her shoes under the table, but that proves nothing. From Eva C. we have photographic evidence, that seems to prove she was actually using her foot to fake - between many genuine productions.
Dr. Richardson declared the grip of the hand had been much too firm for a disguised foot and we have no reason to mistrust him. Others theorized Margerys 12 yr old boy, who was regularly locked in his room not to become suspect to be a confederate, may have freed himself and staged the phenomena! In this case he may have freed himself, entered undetected the Seance room in Lime Street to hide behind his mother to lay his arm around her waist and let it reach out of her dress as Walters'? Everything we know about the seances at Lime Street - for the seances at several institutes this can be directly excluded, because nowhere the opportunity to enter the room had been given because of the strict protocols that detained entry for anybody - even if they weren t as strict as others tell us that an undetected entry was highly improbable because of the narrowness of the room and several other circumstances.
So all allegations against here were at last without any trace of evidence.
Other mediums were destroyed by such theorizations.... 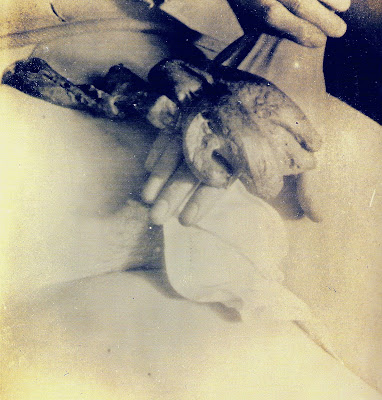 After Dr. Crandon opened the Seances to the Scientific Community the first inquiries came in by William McDougall of Harvard. Being first impressed he stated shortly later, that it maybe could have been faked, although he stated he cannot explain the autonomous voice of her deceased brother that was frequently talking from different positions inside of the Seance Room, while everybody was controlled. 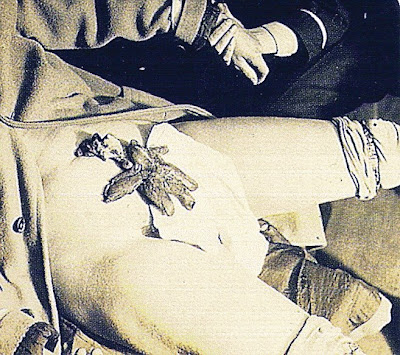 In the large debate between pros and cons regarding Margeries mediumistic productions and between the American SPR and the involved persons from The Scientific American, like Malcolm Bird, who was sure of Margeries genuiness, the ASPR-Researchers W.F.Prince and the Magician Houdini, both fierce debunkers of fraudulent mediums declared Margery as fraud, although she never was actually detected doing so. Their conviction mainly based on Houdinis claims to be able to recreate the effects of Margerys Mediumship. 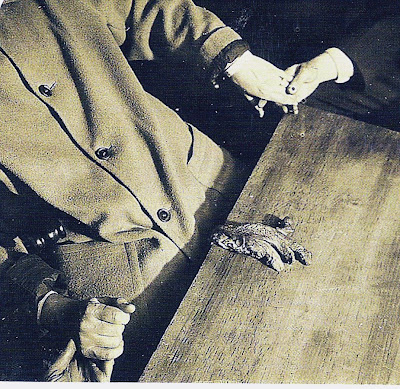 One of their convictions was the alleged ectoplasm (then "teleplasm") may have been in real animal-lung-tissue, presented to the observers as coming out of Margeries nable or vagina.
The two photos above and below were taken only a few seconds apart and show the suspected material. 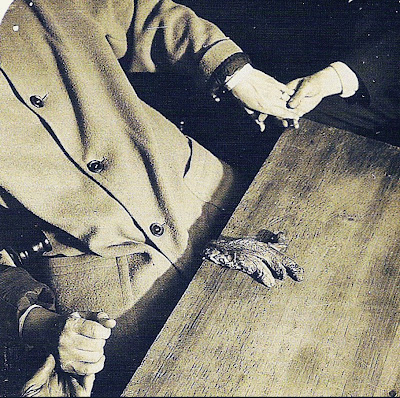 Although intestines may have smelled extremely, no such comments about rotten smells can be found anywhere in the ASPR-reports. Besides the ectoplasmic productions of Margery were very varied and their different features will be shown in an upcoming Part III 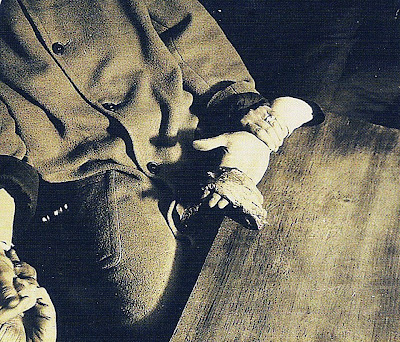 Again we see the malformed substance this time emerging from Margeries vagina. This the first time was observed by the french painter Juliette Bisson with another medium. She filed a report, where she described, how she was witnessing how the substance emerged out of Marthe Berauds genitals in Schrencks "Phenomena of Materialisation". 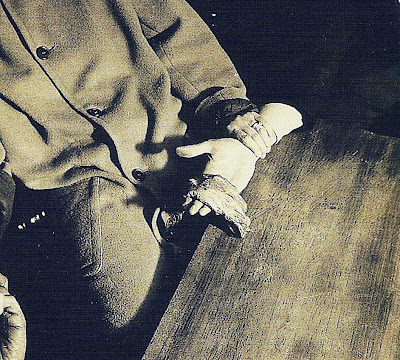 As a side-note it is interesting to know that the Physical Medium Stewart Alexander, whose main control is the same "Walter" (Stinson), produces an ectoplasmic hand, allegedly "Walters", that goes through a visually observable development process looking very much like the claw-like and malformed forms Margery once produced. And not only that. After Stewarts production of the hand is finished, it does the same "shake-hands" with sitters, like in the first photo shown. Stewart Alexander is counted to the momentary performing few genuine physical mediums. 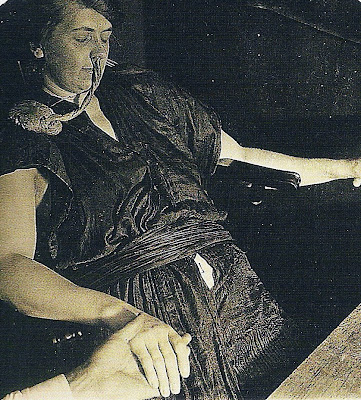 Again two photos made only seconds after the other. This time the mysterious "voice box" is displayed. An ectoplasmic production many mediums claim to be the origin of the autonomous "Direct Voices". There is a row of photos exisisting showing mediums worldwide 0displaying this kind of alike looking ectoplasmic product. 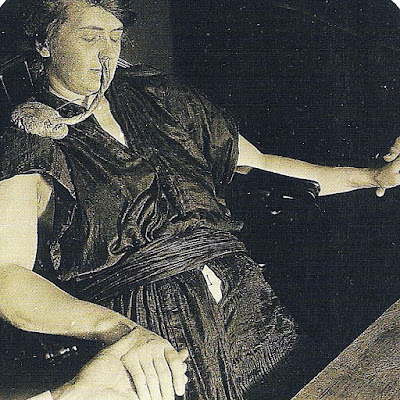 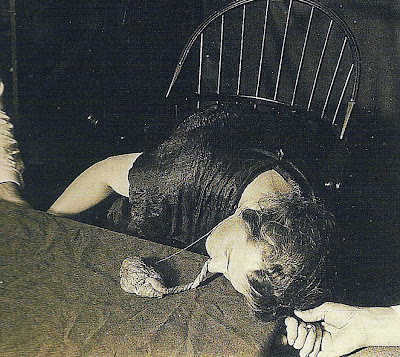 On these last two photos the voice box is again displayed. Interestingly a photo of the UK Physical Medium Jack Webber from the fifties exists, that show exactly the same "model", including the cord-like connection to the mediums ear. 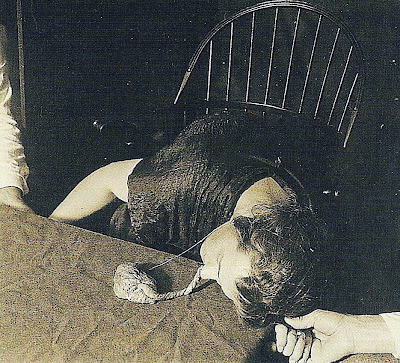 All in all we must state, that Margery was never detected using fraudulent means. The claim of Houdini, he was able to reproduce the phenomena does not suffice to declare them as hoax. Only years later allegations were made, the finger-prints were produced by her dentist. That doesn't answer the question, how Margery managed it in hundreds of sittings of four or five sitters in a small room, always controlled or double-controlled, not only to produce her phenomena under every installed condition (Bell Box, Apport Box, Microphone Box aso), but also why she was never caught in the middle of hoaxing the phenomena.(end)
.
Posted by KALIA Mind Expansion at 19:11 No comments: Links to this post 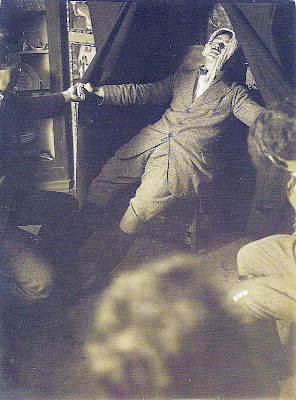 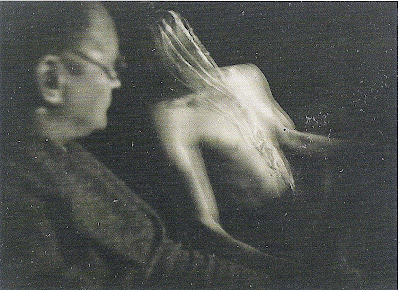